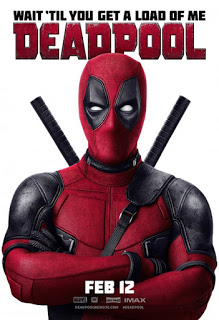 The “merc with a mouth” receives the big screen treatment in Deadpool. Wade Wilson (Ryan Reynolds) is a wise cracking mercenary, who finds love with the beautiful prostitute Vanessa (Morena Baccarin). However, Wade finds out that he has late-stage cancer, which results in him enrolling in a program headed by Ajax (Ed Skrein), who ends up subjecting Wade to a number of horrible experimentations. As a result, Wade gains a healing mutation, but is left horribly disfigured and aware of the meta universe. Naming himself Deadpool, this merc with a mouth sets out on a path of bloody revenge.

After a long wait, the cult Marvel comic character Deadpool has finally made it onto the big screen! Known for his foul-mouthed wisecracks and habit of breaking the fourth wall, this has been a bit of a dream role for Ryan Reynolds, who had been wanting to play the character for at least a decade. This included him playing a less than faithful version of the character in X-Men Origins: Wolverine back in 2009.

Taking place within the X-Men universe, Deadpool sees mercenary Wade Wilson enter into a top secret program to find a cure for his cancer. While he does end up gaining a healing mutation, Wade is left horrible disfigured and more than a bit insane.

Without a doubt, it can said that Deadpool is a character of a cult appeal that not everyone is going to understand. In some ways, the Deadpool film is arriving too late, because films such as Kick-Ass have beaten the character to the punch when it comes to R-rated superhero films with meta elements.

I will start off by saying that I generally had quite a lot of fun watching Deadpool, particularly the fourth wall breaking moments, which begin as early as the opening credits. However, the film isn’t perfect. A good chunk of the film focuses more on Deadpool‘s origin, which are shown as flashbacks shown throughout a fight sequence in the middle of a highway, which also includes a confrontation with X-Men members Colossus (Stefan Kapicic) and Negasonic Teenage Warhead (Brianna Hildebrand).

Another thing about Deadpool that I wasn’t crazy about was the villain Ajax, played by British actor Ed Skrein. There was just something not right about how the character was portrayed and he was a very weak threat to an otherwise fun movie. However, I believe that Gina Carano fared better as the secondary villain Angel Dust.

Deadpool differs greatly from many superhero films by going in a very R-rated direction. This is definitely not a film for the kids, as it features much bloody violence, foul language, and sexual content. However, it is these very adult elements that make up the core of the character and it is great that the film was not toned down to make it more accessible to a mainstream audience.

While the film will probably not be for everyone, Deadpool turned out to be more or less what I was expecting and I ended up leaving the theatre quite entertained.