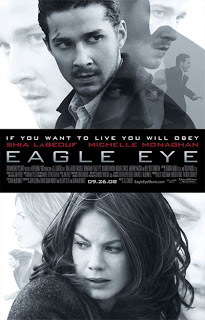 I find it a bit ironic that it a negative review of Eagle Eye at FirstShowing.net that resulted in me to bite the bullet of see the film, after going back and forth about it all day, and I ended up liking it.

The key to me decided to see the film was the desire to know the plot twist that so annoyed the reviewer in the review. After seeing the film, I do have to say that the twist is a bit cliche (and it probably wouldn’t take a genius to figure it out), but I still ended up enjoying the film.

I found it a fun little suspense that kept me at the edge of my seat. Though the ending had a bit of the Speilberg touch (you’ll see what I mean), it was still worth my money.