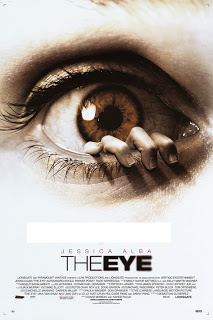 Before I continue with the review, I should make a correction from yesterday’s Movies of the Moment post. I said that The Eye was the latest J-Horror remake, when it actually the remake of a Hong Kong horror film.

That said, the Asian influence wasn’t as evident in this film as films like The Ring and The Grudge and I think that’s a good thing.

I have to admit, that I was a little cautious seeing this film. There is a bit of a backlash against both Asian horror remakes and PG-13 rated horror films.

However, in the end, I quite enjoyed the film. It is not a perfect film, and I would probably say the original film is probably better, however there were some decent scares in the film and it was well worth my time.