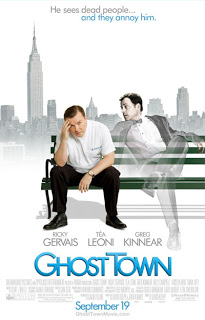 Like many people, I was introduced to Ricky Gervais through his work on the original British version of The Office.

Ghost Town is Gervais’ first North American staring role (though he previously had memorable supporting roles in films such as Night at the Museum, and Stardust). I do have to say that he picked a bit of a generic and formulaic film.

I have to say that Gervais was quite funny and if it wasn’t for him, this would have been just another romantic comedy with a supernatural theme that I would have otherwise skipped (i.e. Just Like Heaven).

In summary, it was a fair film and I hope Gervais picks something better next time.