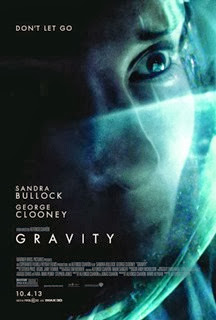 Director Alfonso Cuarón (Children of Men) heads to outer space with the survival epic Gravity.  Ryan Stone (Sandra Bullock) is a bio-medical engineer on her first space mission, working with veteran astronaut Matt Kowalski (George Clooney). While performing a spacewalk, doing work on the Hubble Space Telescope, Stone and Kowalski are hit with the debris of destroyed satellites, the result of a chain reaction caused by a Russian anti-satellite test.  The space shuttle is destroyed and Stone and Kowalski are left stranded in deep space.  With resources limited and communication with mission control knocked out, Stone and Kowalski set out to find a way to head back to Earth. If there is one thing that can be said about Gravity, it’s that the film is a visual wonder.  The vast majority of the film takes place in deep space, with practically everything, expect for the actor’s faces in their helmets, being created digitally.  There probably hasn’t been this level of photorealism in a digitally-created film environment since Avatar back in 2009.  As a result, Gravity is also one of the better 3D films to be released.  Whether it’s something subtle as the characters floating in space, or something extreme like debris flying towards your face, I was overall impressed with the 3D in the film (particularly a humorous shot of a Marvin the Martian figurine floating by).  Since I also saw the film in IMAX, I got a bit dizzy by the scope of the action, since there’s obviously a lot of space in outer space. With the exception of the opening act, featuring banter with mission control (voiced by Ed Harris) and another astronaut working on the Hubble, Sandra Bullock and George Clooney are practically the only two characters in the film.  Most of the backstory for the two characters are revealed over the course of the film, through the conversation between the two.  More than any other, this film is Bullock’s story, since her character is recovering from a past tragedy and she has to learn to muster up the will to live. While Gravity is definitely a technical achievement, I am not going to go all out and say that it’s a perfect film.  The film is not without its flaws and, when you take away all the impressive special effects, the film is a fairly standard story of survival.  That said, I still can say I very much enjoyed the film. 9 | REALLY LIKED IT