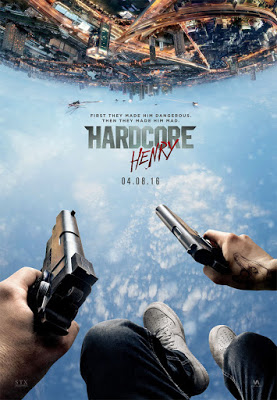 A bio-engineered man rushes to save his wife in the first-person action film Hardcore Henry. Henry wakes up on a table and is greeted by a female doctor, who claims to be his wife Estelle (Haley Bennett). Henry has been brought back to life with cybernetic implants, funded by the telekinetic madman Akan (Danila Kozlovsky). Estelle is taken by Akan and Henry is left to fight through Moscow to rescue her. Henry is assisted in his quest by Jimmy (Sharlto Copley), a man who seemingly has the ability to come back to life in various different forms.

Produced by Timur Bekmambetov (Night Watch, Wanted), Hardcore Henry is a Russian-American sci-fi action film, which is shown entirely from the first-person point of view of the titular protagonist. The film is the directorial debut for Russian music video director Ilya Naishuller, who previously utilized similar first-person effects in the videos he has directed.

The common train of thought surrounding Hardcore Henry is that the film is essentially a live action first person shooter video game, with Henry violently disposing of countless mercenaries on his way to save his wife Estelle from the psychotic madman Akan. Another video game trait in the film comes in the form of the main on-screen supporting character Jimmy, who is able to “respawn” with different personalities and accents after previous versions are killed off.

The story of Hardcore Henry is the relatively simple plot of Henry having to get from Point A to Point B, killing everyone who gets in his way. The film is extremely violent, even receiving the rare Canadian R rating, and the film features some well-executed action set pieces, including a motorcycle chase (with sidecar minigun) and the extremely bloody final battle. All of this is shown entirely through the point of view of the faceless and voiceless protagonist of Henry, who is played by various stuntmen wearing GoPro cameras. This leaves Jimmy as the main face of the story, with Sharlto Copley actually being quite fun in the role. The film also has a brief flashback cameo by Tim Roth as Henry’s Father, who gives some sage advice at the opportune moment.

I was really hoping to have a fun viewing experience watching Hardcore Henry, since it seemed to have a premise that was right up my alley. However, my viewing experience of the film was highly affected by the fact that the action involves practically non-stop moment, with there being a lot of running (with motion blur) and even some parkour style moves by Henry. As the film progressed, the movement really took its toll on me and I got extremely motion sick. The motion sickness got so bad that I stopped caring for the story and was just waiting for the film to end. For the most part, this is what differentiates Hardcore Henry from actual first person shooters, particularly modern ones, which have a much smoother frame rate (reducing motion blur) and you are able to put the controller down and take a break if you start feeling sick. There aren’t really many breaks in Hardcore Henry and the film really took its toll.

The question is whether I should penalize the film, simply because the action made me sick. The answer I have is that I am not going to write-off the film completely. As I said earlier, the film has some well-executed set pieces and I would say that this type of film is best in small doses, with a feature-length point-of-view film being almost guaranteed to result in major motion sickness. As such, I will only recommend this film to people, who aren’t exactly that prone to nausea and can handle the non-stop motion and violent action of Hardcore Henry.