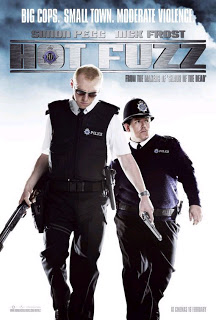 Two years ago saw the release of the very funny horror-comedy Shaun of the Dead.

Now the same team is back for Hot Fuzz, which is a satire on police films.

I should say first that I loved Shaun of the Dead. In fact, I consider it one of my favourite films. However, I have to say that Hot Fuzz seems to be a step down.

I just didn’t find it as “laugh out loud” funny as the previous film. Personally, I think the reason is that Hot Fuzz has a much more complex story and I think quite a few of the jokes just got lost.

That said, I still really enjoyed the film. I especially like the climax, which used every action film cliché in the book.

It may not be as funny as Shaun of the Dead, but I think this film was still a good time.