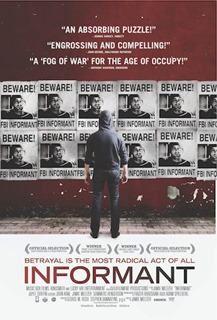 The world of activism is supposed to be all about “fighting the man” and trying to make the world a better place in a way governments are unable or unwilling to do.  As such, it is probably the gravest capital sin for an activist to be found out as an informant for the FBI.  That is exactly what happened in the strange case of Brandon Darby, which is told here in Jamie Meltzer’s documentary Informant.  In the aftermath of Hurricane Katrina, Darby became the co-founder of a relief organization named Common Ground, which provided assistance to the flood victims.  As an activist, Darby had a growing militant mentality and considered himself to be a revolutionary. That all changed one day when Darby found himself in contact with the FBI over concerns about a man recruiting folks to unwillingly fund terrorism.  That case was quickly resolved when the man ended up committing suicide, but the FBI quickly contacted Darby again to infiltrate an activist group planning to protest the Republican Nation Convention.  This leads to a series of events where two young activists find themselves arrested for creating Molotov cocktails and Darby finds himself ousted as an FBI informant and vilified by his former activist friends. No matter what your opinions on activism, there is one truth that is glaringly obvious about Informant: we are are hearing the story primarily from Brandon Darby’s point of view and he is an unreliable narrator.  Like last year’s The Imposter, the film makes heavy use of re-enactments and even breaks the fourth wall a few times to show Darby talking with the filmmakers about how they should portray the events.  However, if the many talking head interviews in the film are to be believed, the events did not at all happen in the way Darby believes that they did. One of the more convincing hypotheses given in the film is that Darby modified the events in his mind to alleviate any guilt about his actions having a direct impact on what happened.  The young activists were initially planning a more peaceful manner of protest and only ended up creating the Molotov cocktails after a tip from Darby resulted in all the protest equipment being confiscated.  Many also insinuate that Darby’s militant mindset had a negative impact on these activists and put ideas in their mind that they wouldn’t have otherwise had. The case of Brandon Darby is definitely a weird one, since he was likely both the cause and put a stop to a possible case of firebombing.  You want to believe that Darby was doing the right thing, but the event might have never happened in the first place if he wasn’t involved.  In an ironic turn of events, despite the activist community turning their backs to him, Darby found himself embraced by conservatives, who now ask him to speak at rallies for the tea party movement. Overall, I have to say that Informant was a very intriguing documentary about a man, who did not really seem sure about what side he was on.  9 | REALLY LIKED IT