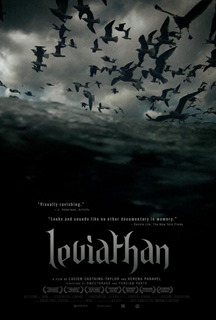 I should probably preface by saying that I have a love/hate relationship with avant garde/experimental films.  Some types of experimental films I find compelling, while others I find excruciating.  Sadly, I have to say that the highly experimental documentary Leviathan falls into the latter category. Leviathan is a cinéma vérité documentary about a group of fishermen on a boat.  The film features no narration or dialogue of any sort and is just the fishermen going through their routine of catching and cleaning fish.  The experimental aspect of the film comes from the location of the cameras, which are attached to the fishermen, nets, buckets, and even underwater.  As such, the viewer is literally put right into the middle of the action. The film is not really kind to those prone to motion sickness and nausea.  The bulk of the film is shown in extreme close-ups with an always moving camera and it definitely made me a bit sick to the stomach.  If the camerawork wasn’t enough, the film also features many graphic images of fish gutting, including shots of fish heads rolling on the deck and blood and guts pouring out of the side of the boat.  This film is definitely not for someone with a weak stomach. On top of my issues with nausea, I found Leviathan to be quite boring to watch.  The film is only 87 minutes long, but it feels much longer than that.  Many shots linger for five minutes or more and you are often just watching the fishermen do repetitive tasks over and over.  There is one particular shot in the film, which is just a guy sitting at a table and slowly falling asleep over the course of five minutes.  I was frequently checking my watch to see how much time has passed and that is never a good thing while watching a movie. I do have to say that I was somewhat impressed with the multiple shots of birds flying in the sky, including one which was upside down.  If all those bird shots were edited together into a short film, it might have made for a compelling experience.  However, in the context of Leviathan as a whole, they were just a small part of an overall excruciating film. Also, I don’t know why the filmmakers even used the title Leviathan.  The term has biblical origins in the Book of Job, which is quoted at the start of the film, and is typically used to describe sea monsters.  Other than the fact that the film involves fishing in the sea, I don’t really get why the title was used.  I guess it just sounded cool. Overall, I can’t say that I was a fan of Leviathan.  As an art film it might have some merits, however I thought that the film was just a whole bunch of nothing.  If you are into experimental films, there are chances you might like Leviathan, but it just wasn’t for me. 3 | DISLIKED IT