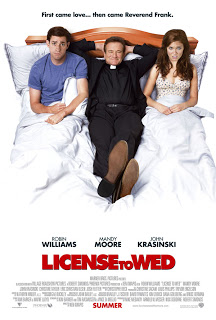 I found Licence to Wed a formulaic, yet very funny, romantic comedy. I liked it.

But, wait a second! 92% of the world’s film critics (based the stats, as of this writing, on RottenTomatoes.com) say that it’s a terrible movie, that I shouldn’t have watched it.

New York Times critic A.O. Scott even said that “the only thing that kept me watching License to Wed until the end (apart from being paid to do so) was the faith, perhaps misplaced, that I will not see a worse movie this year.”

If the movie was so horrendously bad, why did I end up laughing hard and having a good time at the movie?

Maybe the critics don’t share my sense of humour. Take Jim Gordon of the Northwest Indiana and Illinois Times for example:

I found the movie, one scene in particular, monumentally offensive.

The aforementioned sequence in which Krasinski tries to deal with the robotic babies that are always crying and doing disgusting things ends with his shaking one twin until its head pops off. (I’m not giving anything away that isn’t in the movie’s trailers.) The people who made “License to Wed” are so hard up for laughs that they turn Shaken Baby Syndrome into a joke.

You can’t go much lower than that.

If I looked hard enough, I could probably be able to find many examples of scenes in movies that are not politically correct. If you saw this particular scene in context, you would have saw that the robot baby was programmed to go haywire and drive Krasinski’s character crazy. Also, I remember there being a similar shaking scene involving a dog in Men in Black. I don’t remember anyone complaining back then, so why now? Bottom line: The scene was all about Krasinski getting frustrated with an out-of-control robot and NOT about glorifying bad parenting habits (heck, it even showed the people around Krasinski showing offence at his actions).

However, why am I trying to explain this scene? I found it (and the rest of the film) funny and that’s all that matters. However, I do think that some film critics really need to get a better sense of humour.