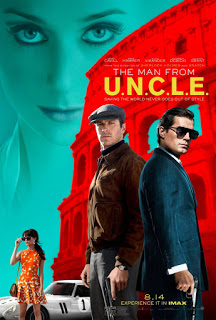 A CIA agent teams up with a KGB operative to stop a terrorist plot in The Man from U.N.C.L.E.. Napoleon Solo (Henry Cavill) is an ex-con, who has become one of the CIA’s best agents. He is assigned to recruit Gaby Teller (Alicia Vikander) and get her help in locating her Nazi scientist father. For the mission, Solo is reluctantly teamed with KGB operative Illya Kuryakin (Armie Hammer) and they set off to locate Gaby’s father and stop the construction of a nuclear weapon he is being forced to build for Victoria Vinciguerra (Elizabeth Debicki) and her husband Alexander (Luca Calvani).

The Man from U.N.C.L.E. is directed by Guy Ritchie and is an adaptation of the 1964 TV series of the same name. The plot involves former enemies, who are instructed by their superiors to team together and take on a common threat. While Napoleon Solo tends to use his intellect and suave demeanor to conduct his espionage, Illya relies primarily on his short temper and habit of attacking first and asking questions later.

The Man from U.N.C.L.E. retains the 1960s setting of the television series and plays the spy action relatively straight, even though there is also a tongue-in-cheek humour throughout. In fact, the film can almost be described as a bit of a buddy comedy, since much of the humour comes from the tense relationship between Solo and Illya. The Man from U.N.C.L.E. also continues the breakthrough year for Swedish actress Alicia Vikander (Ex Machina) as Gaby Teller. In fact, there is scene of Gaby drunk and dancing in a hotel room, which is quite a joy to watch. The film as features a supporting cast that includes Jared Harris as Solo’s superior Sanders and Hugh Grant as Alexander Waverly.

While, The Man from U.N.C.L.E. turned out to be a relatively entertaining film, many of the plot developments ended up being somewhat predictable. However, that isn’t too much of a nitpick, since I ended up enjoying myself by the end of the film. The film also continues the second phase of Guy Ritchie’s career, where he has moved away from the British gangster comedies he was known for in the late 1990s and early 2000s and he has been experimenting with different types of films, such as this and the two Sherlock Holmes films. In fact, Ritchie’s next film will be about King Arthur.

Altogether, despite some predictable plot developments, The Man from U.N.C.L.E. was a entertaining and often humorous spy film.