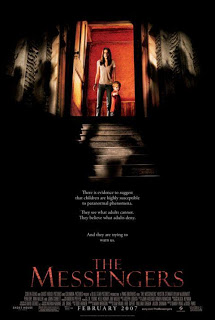 Sam Raimi’s “Ghost House Pictures” production company has been a little hit and miss with the horror films it produces. It started off strong with The Grudge. However, a few months later, company released Boogeyman, which, while watchable, was pale in comparison to the, very creepy, Grudge.

It also seemed, that a lot of the productions Ghost House had planned for the last two or so years ended up in development hell, since no other Ghost House released came out until the release of The Grudge 2 last fall (that film was definitely a disappointment in comparison to the first, but I’m willing to give it another try and I plan on purchasing the DVD when it comes out on Tuesday).

So, now we have The Messengers. I of course had low expectations about this film. In fact, I did not truly decide to see the film until I was at the theatre.

Well…it was better than I expected. Even though it could have been better in some parts (like doing without the Japanese-horror style ghosts), it was enjoyable enough and it even had a good scare or two.

While Ghost House still may have a while to go to make another film as good as The Grudge, it seems that they still have promise.