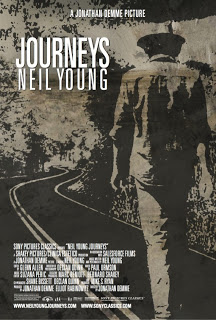 The concert footage is interspersed with documentary footage of Young driving from his childhood hometown of Omemee down to Toronto for the concert.  I somewhat wish that there were more of these scenes in the film, even if it meant extending the running time by an hour or more.

An interesting editing decision involving the concert scenes is how the songs are apparently shown out of order (i.e. the opening song and the encore actually occur very close to each other in the film).  Demme makes use of many interesting camera angles for the performances, the most jarring of which is a camera that was set-up on the mic-stand, giving you a very up-close shot of Young’s face (at one point, spit gets onto the camera, which results in an even more jarring blurry circle).

While most of the performances are relatively straight forward, there was some additional footage shown along with some of the songs.  For instance, the performance of Young’s 1970 song “Ohio” is accompanied by archive footage of the May 1970 Kent State shootings, which inspired the song.  In addition, another of the songs was accompanied by grainy super-8 crowd footage.

Overall, my reactions of Neil Young Journeys are mixed.  The concert footage is quite decent and, even though the set is made up of mostly newer material, I enjoyed the songs (and even have a bit of a desire to get the album).  However, I sort of wished that Demme did more with the documentary footage.  Since there’s only like 5 or 6 documentary segments in the film, it almost seems like an afterthought.  Since the final film is only 87 minutes long, I’m sure Demme could have found room to flesh out the film more.