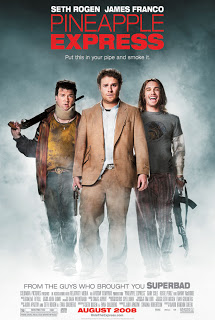 You can definitely say that Seth Rogen has become a big start in a very short period. It has been only three years, since he had his first real prominent film role in The 40 Year Old Virgin.

Pineapple Express mixes a stoner comedy with an action film. Like last year’s Superbad, it was written by Rogen and his writing partner Evan Goldberg.

I have to say that I have probably seen funnier comedies, however the film did have its moments. James Franco was especially funny in his first major role in a Judd Apatow production since co-starting (with Rogen) in the TV show Freaks and Geeks back in 1999.

I also enjoyed the action elements of the film with it seeming both like a serious action film and a spoof.

I am definitely looking forward to see Rogen in his next film when he moves from being in mostly Judd Apatow productions, to starting in the next film by Kevin Smith (you should know the title :P).