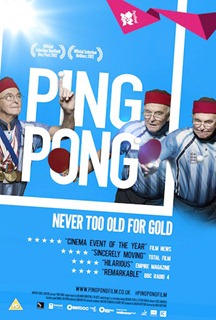 As you can guess from the title, Ping Pong is a documentary about the sport, also known as Table Tennis.  More specifically, the film follows eight participants competing in the “World over 80s Table Tennis Championships” in China.  The film is pretty much as straight-forward sports documentary, which first introduces each of the players one by one, before documenting their progress in the tournament. Probably the stand-out aspect of this documentary is the extreme age of the players, ranging from 80 all the way to 100.  Part of the point of this documentary is show how much energy these elderly people still have.  Of course, one of the main obstacles shown in the film is the declining health of one of the players, with many of the big reveals surrounding this player saved until the very end. Overall, I would say that Ping Pong is a heart-warming documentary that shows that, just because you are getting old, doesn’t mean that you have to stop living. 8 | LIKED IT