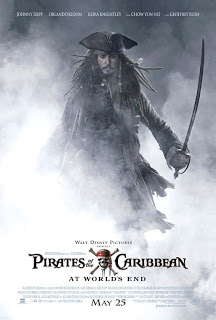 Here is the third and final of the May “threequels”

At approximate 2 hours and 50 minutes in length, the movie could have definitely used a bit of trimming. It’s not that hard to follow, like some critics are saying, however it could have done without some of the sub-plots. Specifically, Chow Yun-Fat’s Sao Feng seemed little more than a transitionary character, who was only need to move the plot along. Then there was the fact that the character of Davy Jones seemed “neutered” for most of the film, as he was forced to obey another man.

That’s said, this film has, hands down, the most exciting climax of the series and that more than made up for any of the shortcomings in the rest of the plot.