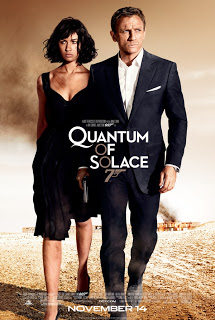 I guess it can agreed that the James Bond series would seem a little dated with newer action-packed spy films like the Jason Bourne films showing up.

However, I never expected the producers to try and combine the two.

There are many times throughout the film that seems to borrow from the Bourne films (including a hand-to-hand fight scene and a plot element where Bond is deemed rogue).

However, there was enough in this film to distinguish it as a Bond film and I thought it was entertaining enough, even I would still say that I thought Casino Royale (which I rewatched last night to prepare for this film) was the better film.