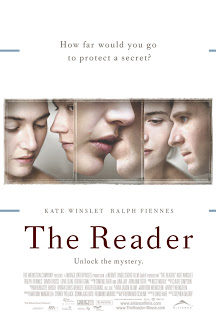 I probably wouldn’t have been that compelled to check out The Reader if it wasn’t for the fact that it had just received four Golden Globe nominations, including Best Picture (drama).

I would have to say that I found it a decent enough film. I don’t know if I would go as far to say that it deserved it’s Best Picture nomination, but I did like this romantic drama about a man reminiscing about his relationship with an older woman, who always insisted that he read to her.

The trailer for the film gives away one of the film’s major revelations (that she was a concentration camp guard), but I would have to say that was the least poignant of the revelations in this film.

I will repeat that I found this a decent film, but I’m not sure if the nominations will go all the way to the Oscars (acting nominations being more likely).