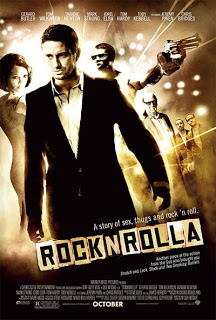 Since, the release of Snatch in 2000, Guy Ritchie found difficulty in moving away from the formula the made him famous.

2002 saw the Madonna-staring Swept Away, which loathed by pretty much everyone.

Then came Revolver 2005, which took the crime films Ritchie was associated with, removed the comedy, and added a cerebral element that confused most viewers. So much so, that after debuting at the Toronto Film Festival (where I saw, and liked, it), it never surfaced in North America again before being dumped in a brief theatrical run last December.

Now comes RocknRolla, which returns Ritchie to the type of film that made him famous: The heist comedy.

I have to say that this makes RocknRolla Ritchie’s best film since Snatch and it was a fun film too. The film follows a similar formula, in how it uses a simple plot element that is essentially a MacGuffin in order to explore the exploits of the many characters in the film.

One face I was missing was that of, Ritchie regular, Jason Statham. I guess Statham’s success in North America made him unavailable for the film (I also know, which character he would have been most likely to play). However, the rest of the cast makes up for his absense (Gerard Butler in particular).

Overall, RocknRolla was a fun film and I look forward to Ritchie’s next attempt to diversify his films with his take on Sherlock Holmes.