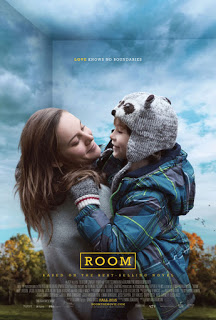 A young boy and his mother adjust to life outside the confined quarters where they lived in Room. Jack (Jacob Tremblay) is a five year old boy, who has only known existence in “room,” where he lived with his mother Joy (Brie Larson). Joy has tried her best to shelter Jack from the truth of their living situation, but has decided that the time has come to leave room. However, getting out is only the first of the many challenges for this mother and son.

Based on the novel by Emma Donoghue, Room is a drama that focuses on the relationship of a young child and his mother, as they undergo some very profound changes to their way of life. The film starts off being ambiguous to what exactly “room” is, even though it is obvious that it is the only place that Jack has ever known. Life inside of room is only the first half of the story and things get a lot more complicated when Jack and his mother find themselves in the outside world.

The ultimate question that Room is asking is about whether somebody would be able to adjust to life in the outside world, after previously only knowing a confined lifestyle in an isolated spot. Indeed, post traumatic stress disorder plays a major role in the second half of Room, as both Jack and Joy try to adjust to life on the outside. The film for the most part is told from Jack’s perspective, with him giving voice-over narration about how life in “place” differs from life in “room.”

Despite still being relatively young, at 26 years of age, Brie Larson has already had quite a career. Beginning as a teenage pop singer, I first became aware of Larson from her role on the Showtime television series, United States of Tara, playing the titular character’s promiscuous teen daughter. Brie Larson went on to receive critical acclaim in 2012’s Short Term 12 and she is quite excellent in her performance in Room. Equally impressive is child actor Jacob Tremblay, who has to hold his own  for much of the film. The film also features notable supporting performances by Joan Allen and William H. Macy as Joy’s parents.

While I have remained purposely vague to the reason why Jack and his mother was in “room” in the first place, the film is ultimately more about the close bond between the two. No matter what challenges this child and his mother face, it will be their love for each other that will help them get through. As such, Room ends up being a very touching mother/son PTSD drama.