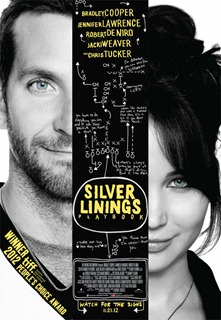 Romantic comedies are usually films I avoid like the plague.  They have a highly clichéd nature to them that does not appeal to me.  Of course, there are always exceptions to the rule and my curiosity peaked when Silver Linings Playbook won the People’s Choice Award at this year’s Toronto International Film Festival. The film stars Bradley Cooper as Pat, a man recently diagnosed with bipolar disorder, who has just been released from the mental hospital (perhaps prematurely).  His father (Robert DeNiro) is an OCD football fan and sees his son as a good luck charm that helps the Philadelphia Eagles win games.  However, Pat is more interested in reconnecting with his estranged wife, which causes him to cross paths with Tiffany (Jennifer Lawrence), a woman who seems to be a bit on the crazy side herself. After seeing the film today, I do have to say that somewhere inside of Silver Linings Playbook is a film that could possibly end up being one of my favourites of the year.  The film is definitely better than most romantic comedies with stand-out performances by most of the cast, especially Lawrence, whose foul-mouthed character is not your typical romantic lead.  However, by the end, the film goes down the predictable path seen in most romantic comedies. The film actually shines the best at the more dramatic moments and part of me wishes that film went entirely down a dramatic path.  At its centre, the film is about a man trying to cope with his mental illness, however I thought that this aspect of the film went on the backburner once the rom-com aspect of the film came front and centre. Like I said, Silver Linings Playbook is better than your average romantic comedy, but when it is all said and done, it still is one.8 | LIKED IT