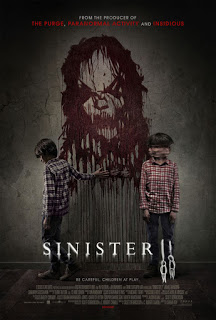 Another family is targeted by the evil deity Bughuul in Sinister 2. Following the events of the first film, Ex-Deputy So & So (James Ransone) has committed himself to investigating Bughuul and ensuring that it does not cause anymore deaths. So & So’s investigation leads him to an apparently abandoned farmhouse, but he arrives to find it occupied by Courtney Collins (Shannyn Sossamon) and her two sons Dylan (Robert Daniel Sloan) and Zach (Dartanian Sloan). As Dylan is enticed at night by ghost children, lead by Milo (Lucas Jade Zumann), Ex-Deputy So & So has to find a way to save Courtney and her family.

I had skipped 2012’s Sinister upon its initial theatrical release, though I later and was pleasantly surprised by its quality. The original plot involving a crime writer stumbling upon Super-8 snuff films, which ends up being connected to a supernatural threat, ended up being a quite solid story, which even made me feel a bit uneasy at times. However, Sinister was very much a stand-alone story and the film had a pretty definitive ending to it.

For this sequel, unnamed supporting character “Deputy So & So” was made into the new lead, even though the puzzling decision was made to leave him without a name, with him just being credited as “Ex Deputy So & So.” No longer a police officer, So & So now works as a private investigator, who is obsessed with tracking down the pagan Babylonian deity Bughuul (aka the Boogyman) and stopping the cycle of death that surrounds it. This investigation leads So & So to Courtney Collins, a single mother, who is living in hiding from her abusive ex-husband. Courtney’s son Dylan is visiting at night by ghostly children, who force him to watch their movie, so he can eventually become one of them.

Sinister 2 falls in the trap of many horror sequels, in how the film strives to explain too much, while also somewhat becoming a parody of itself, in terms of the central snuff videos. While the videos in the first film were disturbing at times, they were generally of crimes that seemed totally plausible.  In Sinister 2, the videos show deaths, such as crocodiles jumping up at bodies hanging over the water or rats trapped in buckets digging their way out through people. The film really seems more focused on extreme violence than actually making these videos scary.

While Sinister focused primarily on adults, Sinister 2 is all about the kids, namely in how it shows how they are recruited into Bughuul’s service.  This results in the ghostly kids, who are only glimpsed in the original film, to play a major role in the film.  In fact, it can be argued that the lead ghost of Milo is more of an antagonist than Bughuul, who just appears from time to time for jump scares.  Speaking of which, the film also overdoes the fact that Bughuul lives in any image of him, so there are many jump scares of him moving in photos or computer screens.

One aspect of Sinister 2 that really rubbed me the wrong way is the subplot involving Courtney’s abusive ex-husband Clint (Lea Coco). The film didn’t really need to have this domestic abuse angle and Clint is an absolutely despicable character whenever he is on screen. The only thing he is missing is a white tank-top and the abusive husband stereotype would be complete. This angle is only in the film to move the plot along and I hated that it was there.

It’s really a shame that Sinister 2 wastes the talents of director Ciarán Foy, who was behind the truly intense 2012 horror film Citadel. It fact, I would just recommend that you skip Sinister 2 and just seek out that film.