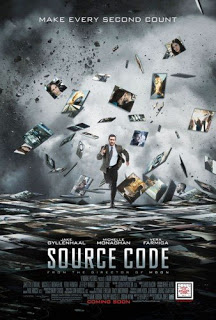 Duncan Jone may be David Bowie’s son, but he is also starting to make a name for himself as very compelling science fiction.  After his excellent debut film Moon, which I still consider one of the best science fiction films I’ve seen, Jones returns for somewhat more mainstream, but still interesting, follow-up.

The plot for this film is actually quite simple: using an experiment program, a soldier (played by Jake Gyllenhaal) has his consciousness transported into a passenger on a train, eight minutes before a bomb goes off.  He has to repeatedly relive these eight minutes in order to identify the bomber and stop a future attack.

It’s a plot very much like Groundhog Day, however there are some twists and turns that are revealed throughout that keeps things interesting.  The film also includes a great, and very sci-fi, ending.