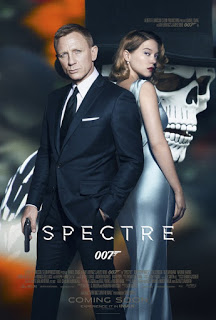 Agent 007 faces his greatest adversary in Spectre. Going against orders from MI6, James Bond (Daniel Craig) tracks down a criminal organization, whose members wear rings with the insignia of an octopus. Bond finds that this organization, known as SPECTRE, is lead by Franz Oberhauser (Christoph Waltz), a presumed dead man from Bond’s past. Bond tracks down his old nemesis Mr. White (Jesper Christensen) for answers about SPECTRE and is directed to White’s daughter Madeleine Swann (Léa Seydoux), who has the information required to locate the headquarters for SPECTRE and stop Oberhauser.

Due to legal issues, it has been 44 years since the criminal organization of SPECTRE has been featured in an official Eon Productions James Bond film. With the copyright to the SPECTRE name finally being resolved in 2013, it was time that the organization be introduced in the rebooted Jame Bond continuity that began with 2006’s Casino Royale.

With this being a film called Spectre, I don’t think it is too much of a spoiler that Christoph Waltz’s character of Franz Oberhauser now goes by another name that is all too familiar to fans of the 007 franchise. I don’t really see why there was a need for smoke and mirrors, since the character’s identity was quite apparent when his shadowy figure first emerged at a SPECTRE meeting in Rome. The persona is only solidified when Waltz is later seen wearing a familiar grey jacket and there is even a glimpse of a white Persian cat.

While Bond is dealing with SPECTRE, there is a secondary storyline back at MI6, where M (Ralph Fiennes), Eve Moneypenny (Naomie Harris), and Q (Ben Whishaw) are dealing with the possible end of the 00 agent program, to be replaced by the “Nine Eyes” surveillance system operated by Joint Intelligence Service head Max Denbigh, aka C (Andrew Scott).

Spectre features the return of many over-the-top aspects of the 007 films that were previously set aside to give Daniel Craig’s James Bond films a more gritty and realistic feel.  While some viewers might be turned off by this apparent backpedaling, I am perfectly fine with the film’s return to hi-tech gadgetry, maniacal antagonists, and silent henchmen, represented in Spectre by wrestler Dave Bautista (Guardians of the Galaxy) as the hulking Mr. Hinx, who gets into a very epic first-fight with Bond aboard a train.

Then of course, there are the Bond girls. Monica Bellucci makes a brief appearance in the film as probably the most age-appropriate love interest for Bond, even though she is really only in the film to give Bond some information. More central to the story is French actress Léa Seydoux (Blue is the Warmest Colour) as Madeleine Swann, who probably ends up becoming the most important Bond girl, since Vesper Lynd back in Casino Royale.

Probably the most interesting element of Daniel Craig’s run as James Bond is how all the films have an interconnected continuity, instead of merely being stand-alone stories. This comes into play big time in Spectre, which essentially bring this continuity full circle. The question that is left after the events of this film is where does Bond go from here? Since Daniel Craig will be playing Bond at least one more time, it will be interesting to see what happens in the next film.