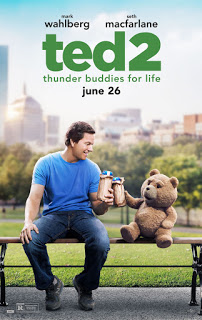 The adventures of the talking teddy bear and his human best friend continues in Ted 2.  Things looks happy for Ted (Seth MacFarlane) as he marries his girlfriend Tami-Lynn (Jessica Barth), even though it’s a sad time for John (Mark Wahlberg), who has recently divorced.  When Ted and Tami-Lynn try to have a child, Ted’s rights as a human being come into question.  To prevent Ted from being classified as just properly, he and John hire junior lawyer Samantha (Amanda Seyfried) to handle the case.  Meanwhile, psychotic loner Donny (Giovanni Ribisi) has a plan for revenge.

Let’s begin my stating the most obvious fact about Ted 2: It’s a stupid movie, with a stupid premise.  I’m not necessarily saying that as a negative about the film, but it should be fair to acknowledge that a film about a sentient foul-mouthed teddy bear is inherently ridiculous.  Ted 2 is full to the brim with politically incorrect crude humour and the film will most definitely offend many people.  There will be folks who will call the film sexist, homophobic, transphobic, and just plain mean spirited.

So, is it a bad thing that I considered Ted 2 is often be absolutely hilarious?  Even though there are a lot of gags in the film that really push the line, including a couple gross-out sight gags, I still found myself cracking up quite often.  Did I feel guilty about laughing at some of these jokes?  Possibly, but I didn’t let that overshadow the fact that Ted 2 entertained me.

For the post part Ted 2 follows the same basic formula as the original film, except that the plot focuses more on Ted and his efforts to get legally declared human.  This results in the hiring of Samantha, who also becomes a new love interest for John, with Mila Kunis having been written out of the film due to her pregnancy at the time.  The film also has Giovanni Ribisi reprising is antagonistic role of Donny, as he cooks up a plan with the head of Hasbro to kidnap Ted and see what makes him tick.

As is the case with many Seth MacFarlane films, Ted 2 is filled with many random gags and sudden cameos, my favourite involving a certain Irish actor buying a box of cereal.  I’m sure those who enjoyed the first Ted will also find the second film enjoyable, even though it is much more of the same.  Those who absolutely hate Seth MacFarlane’s brand of humour are probably best advised to stay away.  That all said, I am not ashamed at all to say that I found Ted 2 to be a pretty entertaining, hilarious, and even touching film.