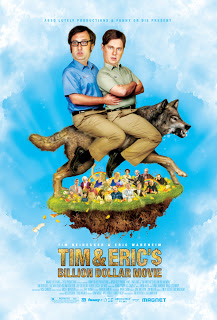 Nearly 11 years ago, I made a serious error in judgement when I went to see Tom Green’s film Freddy Got Fingered, without being fully aware at how extreme Tom Green’s “comedy” was.  I ended up hating the film and I thought there wouldn’t be any chance that I would see a worse film.

Tim and Eric’s Billion Dollar Movie is another error in judgement, not only in how I was not really familiar with Tim Heidecker and Eric Wareheim’s “comedy,” but also in how I ignored the very bad trailer for the film and gave it a shot anyway.

The film starts off with a somewhat smart self-reflexive parody of films (and movie theatres), featuring Jeff Goldblum no less, and if I stopped watching the film after the five minutes or so, I probably would have been okay with the film.

However, the film quickly goes downhill.  If Tim and Eric’s schtick is to be as politically incorrect as possible, they did a grade A job of it.  Being a respectful person, I don’t often consider walking out of films.  However, this thought crossed my mind on two separate scenes, which were so graphic and shocking, I actually had to cover my eyes to prevent myself from being disgusted to the point of vomiting.

I heard some laughs in the theatre, so there are probably people in the world who like this type of juvenile humour.  I on the other hand, wasted 93 minutes of my time.