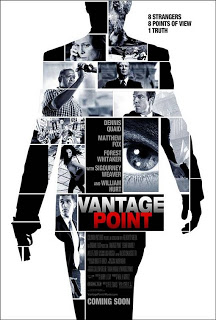 Vantage Point is a sad example of a film that I personally enjoyed, while many of the other people in the theatre obviously didn’t.

Based on what I overheard from my fellow movie patrons, the reason for this dislike is how the film is structured. The film centres around one incident, which is repeated in its entirety multiple times, each time from the point of view of a different individual.

I would summarize, that the theatre-goers that didn’t like the film either did not know and/or did not like the story being shown (complete with the same events) multiple times (despite what the poster says, the story was only shown six times, with any remaining of the eight point of views being combined during the final segment).

It probably did not help that the film literally rewinds after every segment (which resulted in more groans each time). There probably could have been a better way to transition between the segment.

Despite these criticisms about the structure and how it probably would just confuse mainstream audiences, I enjoyed the film and I found the multiple point of views very intriguing.

However, that is just my point of view.