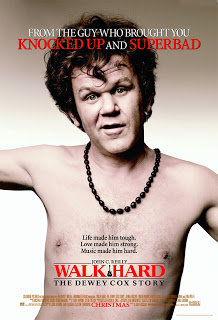 This year’s holiday season is jam packed with films I’d like to see, so here is the third film I’ve seen within a week’s timespan (with at least one or two more planned before the end of the holidays).

This has been a killer year for producer/director Judd Apatow, whose films Knocked Up and Superbad became hits during the summer.

While those two movies were straight-up comedies, Walk Hard is a satire and that’s the reason for me why it’s not as good.

I found the story interesting and the songs were actually quite good. However, when it came to jokes, I found the film was lacking. I think the film was trying to point out the absurdity of biopics and the result was really hit or miss. There are times when I would let off a bit of a giggle, however I never once broke out laughing (which is something I expect to do when I go see a comedy).

In the end I believe Judd Apatow should stick to original comedies instead of doing more satires. I think that is where his strength is.