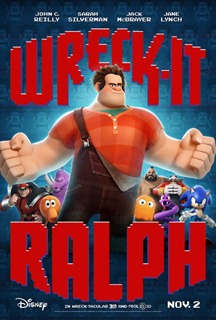 I’ve always been a huge fan and player of video games, so the premise of Wreck-It Ralph – about a video game villain fed up with his bad guy status – really appealed to me.  I also liked the fact that Disney took the time to licence actual video game characters, from games such as Super Mario Bros, Street Fighter 2, and Q-Bert, to make brief cameo appearances in the film. In the film, Wreck-It Ralph is the villain of a Donkey Kong-esque arcade game called Fix It Felix Jr and he is fed up by the poor treatment he receives.  He decides to leave the game in order to prove that he too can be the hero. The problem is, the game requires him to operate, so Felix Jr heads out to get Ralph to return to the game before they are unplugged for good. The film features a fairly well known voice cast including John C Reilly as Ralph, Jack McBrayer (30 Rock) as Felix, Sarah Silverman as the glitchy Vanellope, and Jane Lynch as Calhoun (star of the first person shooter Hero’s Duty).  I also have to name-check Alan Tudyk, who has the most surprising voice role in the film. Overall, I thought that Wreck-It Ralph was a fun film with many classic video game homages.  However, the plot of the film eventually settles within the, made-up for the film, racing game of Sugar Land, at which time the film becomes a more standard animated adventure.  It’s probably licencing costs that prevented the classic video game element from being more prominent within the plot, however I still have to say that I found the film to be entertaining (and make sure to stay through the entire end credits).8 | LIKED IT