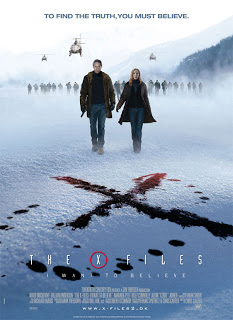 I don’t remember much of the first X-Files film, since I had watched it late at night and fell asleep through parts of it. I was hoping the re-watch that film before seeing this film, but I had no luck finding it in the stores (I guess everyone else has the same idea).

Anyways, this film is coming out a decade after the first film and six year after the end of the series.

Director/creator Chris Carter took a chance by putting aside the whole alien conspiracy storyline of the show and concentrate on making the film a stand-alone story.

That would probably be the film’s main flaw, since it really seemed as nothing more as an expanded version of one of the lesser episodes of the show. I also have to say that out of all the paranormal subjects they could have covered, they picked a bit of a non-extravagant one for the story (even though the weirdness factor goes up a bit towards the end).

Still, it was an OK film and it probably succeeds in the task of reintroducing The X-Files to the public so it can return with a (hopefully) better third film.