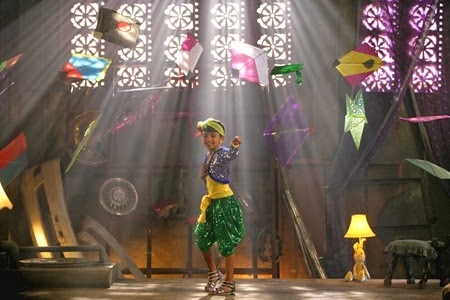 The 17th annual Reel Asian film festival kicked off with an opening gala film that heralded the addition of South Asian films to the festival’s line-up.  Bombay Talkies is an anthology film, which celebrates 100 years of Indian cinema.  Each of the four short films, directed by a different Bollywood director, makes reference to Indian cinema in some way or another, rather it be the music, the dancing, or the actors involved. For this review, I will look at each of the segments individually, before giving my overall thoughts. Segment 1: Ajeeb Dastaan Hai Yeh
Directed by: Karan Johar This segment focuses on a gay man named Avinash (Saqib Saleem), who works as an intern at a magazine and befriends his co-worker Gayatri (Rani Mukherjee).  When Avinash is invited to Gayatri’s house for dinner, he meets her husband Dev (Randeep Hooda).  Avinash and Dev both share a love of old Hindi movies and music and Avinash quickly begins to suspect that Dev might in fact be a closeted homosexual. I wasn’t entirely all that sure what to think of this this segment.  It begins with Avinash angrily confronting his father, who had kicked him out from home, for being homosexual.  However, the segment quickly moves into a more comedic tone, based around sexual tension between Avinash and Dev, with many humorous double entendres in the dialogue and music.  Of course, the more serious themes about homosexuality and living a lie resurfaces towards the end of the segment. In reference to the overall cinematic theme of Bombay Talkies, this segment is all about the music.  Namely, the segment features a child beggar, who sings the song “Ajeeb Dastaan Hai Yeh,” which the title of the segment.  The child is definitely a good singer and her scenes were the main highlight of the segment.
7 | FAIR  Segment 2: Star
Directed By: Dibakar Banerjee This segment focuses on a failed actor (Nawazuddin Siddiqui), who has been struggling to find odd jobs.  Quite serendipitously, he is cast as an extra in a film shoot, which he takes quite seriously and needs to spend some time pondering his “role.”  It’s at this time that he see the sprit of his old teacher, who chastises him at the the direction he has taken with his life. This was definitely the most fun of the segments and it was quite humorous seeing this man turn into quite the method actor for what is ultimately a brief walk-on role.  I quite liked he sound mix in this segment, which had the film crew sounding like they were talking behind the audience, while the man is in the foreground.  The segment also features a very touching ending. It was overall an enjoyable watch.
8 | LIKED IT Segment 3: Sheila Ki Jawaani
Directed By: Zoya Akhtar In what is probably the most interesting of the segments, a 12 year old boy named Vicky (Naman Jain) is pushed by his father to be a soccer player.  However, Vicky has no interest in playing soccer and instead dreams about being a Bollywood dancer, like his idol Katrina Kaif. This segment is quite interesting in how it tackles both gender identity issues, as well as the message that we should follow our dreams, even if we must keep them secret.  The only person that Vicky is really open to, about his desire, is his sister, who gets a bit jealous at how much attention Vicky gets, while her parents are not willing to pay for a school trip.  Vicky decides to help his sister out, in his own way, and I quite liked the segment’s very shameless ending. This segment was definitely the best of the bunch.
9 | REALLY LIKED IT Segment 4: Murabba
Directed By: Anurag Kashyap In this segment, Vijay (Vineet Kumar Singh) is asked by his dying father to travel to Mumbai and meet Bollywood superstar Amitabh Bachchan, getting him to take a bite of a homemade murabba and bring the other half home.  Vijay thinks that this would be a relatively simple task, however after the doormen refuse to let him in, the quest to meet Bachchan becomes a very difficult one. This is probably the weakest of all the segments, but it is interesting to see Vijay’s life pretty much fall apart, as he struggles to meet this famous actor and get him to take a bite of the murabba.  In fact, Vijay comes to describe this task as an all out holy quest, with Amitabh Bachchan being seen as some sort of divine figure.  I also have to say that I like the somewhat ironic way the segment ends.
7 | FAIR  At the end of the film, there is musical number, which acts a curtain call of sorts.  The musical number features many classical Bollywood film clips, plus appearances by many of Bollywood’s top actors.  It was definitely a great way to end the film. Overall, I can say that I enjoyed Bombay Talkies.  While I’m admittedly not that well-versed on Bollywood films, the film still works as a love letter to all that is Indian Cinema. 8 | LIKED IT