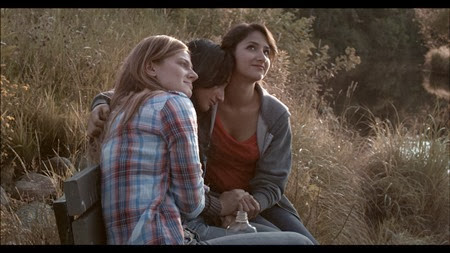 Set against the backdrop of the 2004 U.S. presidential election, this coming-of-age story focuses on Farah Mahtab (Nikohl Boosheri), a twenty-something Iranian-American woman, who is frustrated by her lack of sexual experience.  Farah sets out on a road trip Roopa (Kiran Deol) and K.J. (Kandis Erickson), to campaign for John Kerry, with both Roopa and K.J. wanting Farah to finally get around to losing her virginity.  Over the course of the next few weeks, these three friends grow to know each other better and learn from this period, when American really wanted change. I’m going to go straight out and say that I probably would have liked Farah Goes Bang much better if it did away with the “lose your virginity while on a campaigning roadtrip” premise.  Why couldn’t the film just be about three friends getting to know each other better?  There is actually a point when Farah’s quest to lose her virginity goes to the wayside, at which time the film got more interesting for me.  Of course, since the film is titled Farah Goes Bang, the film almost seems obliged to feature a resolution to this premise, which just sort of happens towards the end.  Of course, I do have to give points for the clever double-entendre of the film’s title, which plays out in said scene. Like I said, there’s plenty going on in Farah Goes Bang, which is much more interesting than a quest to get laid. In fact, I was quite intrigued how the film was chosen to be a period piece and take place during John Kerry’s failed bid at the U.S. presidency.  Each of the three friends have their own reasons for campaigning for Kerry, with their opinions evolving over the course of the film.  In addition, because they were campaigning for a democratic candidate, they had to put up with some hard criticism, and even racism, from the many Bush supporters they come across.  However, there is one moment in particular, in which Farah comes across an old man and the two end up discussing the reasons for political affiliations.  It ended up being one of the more poignant moments for me.  There is also quite a bit of character development for K.J., who exhibits a violent temper, often in defence of racist comments against either Farah or Roopa, but also has one of the most personal reasons for campaigning for Kerry. Overall, I can say that Farah Goes Bang turned out to be an okay enough coming-of-age story.  However, I really could have done without the quest for Farah to lose her virginity, since there were much more interesting plot elements, which could have been better developed.  Of course, when it is all said and done, Farah Goes Bang is probably not a film that is meant for me.6 | WATCHABLE