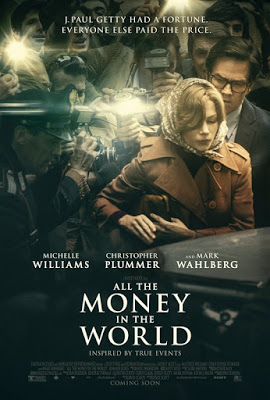 An oil tycoon refuses to pay the ransom for his kidnapped grandson in All the Money in the World. John Paul Getty (Christopher Plummer) is an incredibly successful oil tycoon, who made billions drilling and shipping oil from the Saudi desert. In 1973, Getty’s 16 year old grandson John Paul Getty III (Charlie Plummer) is kidnapped in Rome and Getty refuses to pay the $17 million ransom, despite the pleas from his estranged daughter-in-law Gail Harris (Michelle Williams). Instead, Getty assigns his security adviser, and former CIA agent, Fletcher Chase (Mark Wahlberg) to negotiate with the captors.

“Painfully Rich: The Outrageous Fortunes and Misfortunes of the Heirs of J. Paul Getty.” All the Money in the World made headlines a couple months ago when it was announced scandal-ridden actor Kevin Spacey would be replaced as John Paul Getty by Christopher Plummer, with the reshoots happening less than a month before the release of the film. As such, it is probably impossible to judge the film without that context.
Personally, I believe that Christopher Plummer was the superior choice to play John Paul Getty, with the actor having no need for the prosthetic age make-up worn by Spacey. Since John Paul Getty spends much of the film at his estate in England, I can guess that it probably wasn’t too difficult to integrate the reshoots into the final film. Plummer’s performance as Getty straddles the line between being someone who truly cares for his grandson, yet is too much of a miser to part with even a small percentage of the wealth he acquired, opting instead to invest in artwork and other “things.”
The bulk of All the Money in the World primarily focuses on Michelle Williams as Gail Harris and Mark Wahlberg as Fletcher Chase. The two repeatedly try to negotiate with kidnapper Cinquanta (Romain Duris) and get the ransom down to an amount the Getty is willing to pay. Cinquanta himself is a complex character, who progressively develops sympathy for the kidnapped John Paul Getty III and does not want to see him come to harm, even as the kidnappers resort to increasingly extreme measures to get the ransom.
While I have to say that All the Money in the World ends up being a somewhat decent ransom thriller, I do believe that the film will ultimately be remembered for the stuff that happened behind the scenes, whether it be the last minute reshoots to replace Kevin Spacey or the subsequent reports of the extreme wage gap between Michelle Williams and Mark Wahlberg for said reshoots. It’s almost a shame really.
7 / 10 stars