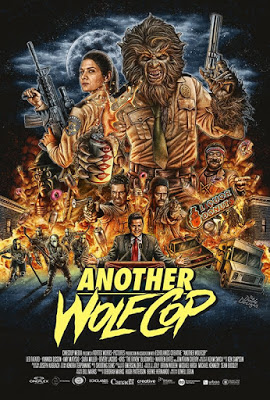 The lycanthrope police officer returns to duty in Another WolfCop. Sometime after the events of the previous film, officer Lou Garou ( Leo Fafard) continues to enact vigilante justice as WolfCop, while Tina (Amy Matysio) is now chief of the Woodhaven sheriff’s department. After eviscerating a group of thugs, Lou is unexpectedly reunited with local conspiracy theorist Willie Higgins (Jonathan Cherry), who was previously kidnapped and replaced by shapeshifters. It soon turns out that the shapeshifters have a new plan to take over Woodhaven, using a new brewery/hockey area introduced to the community by charismatic billionaire Sydney Swallows (Yannick Bisson).

It was back in 2013 when writer/director Lowell Dean won the CineCoup Film Accelerator to receive funding and distribution for his horror-comedy film WolfCop. After the cult success of the film, Dean reunites the entire cast back together for Another WolfCop.

In the time since the previous film, Lou Garou’s alterego of WolfCop has become somewhat of a superhero in the town of Woodhaven, with there even being WolfCop merchandise for sale at the local Liquor Donuts store. WolfCop and Tina soon learn that the shapeshifters have returned to Woodhaven and have a new plan for domination, centered around the release of the new beer “Chicken Milk Stout” that Sydney Swallows plans to unveil, along with Woodhaven’s new hockey team the Dark Stars. After the unexpected return of Willie Higgins, Lou seeks the help of Willie’s sister Kat (Serena Miller), who is an expert on how the shapeshifters operate.

Another WolfCop is a film that is bigger, bloodier, and hairier than the original, while also following the adage that “if it ain’t broke, don’t fix it.” The film features some callbacks to to more popular moments of the original film, including the clever use of the songs of the musician Gowan, who even appears in the film in a featured cameo. The film also features some cameos from Kevin Smith, as Woodhaven’s interim mayor Bubba Rich, as well as the members of Astron-6, who appear as thugs in the film’s opening action scene.

It is quite obvious throughout Another WolfCop that Lowell Dean had a much bigger budget to work with, which includes some much more extravagant gore effects. The film also ups the Canadian content, with a central plot centered around beer and hockey, which is actually quite similar to the plot of the 1983 Bob & Doug McKenzie film Strange Brew. It is obvious that Lowell Dean has the intentions of continuing the WolfCop universe, with Another WolfCop leaving enough open for future sequels.

Altogether, if you are a fan of the original WolfCop, chances are you will like Another WolfCop just as much (or better).