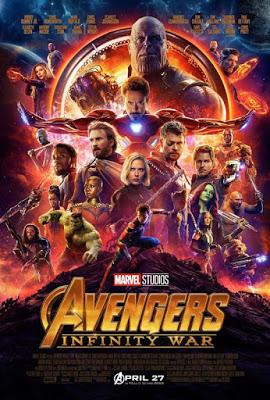 The heroes of the Marvel Cinematic Universe face their biggest challenge in Avengers: Infinity War. As The Avengers remain divided, following the events of Captain America: Civil War, the intergalactic tyrant Thanos (Josh Brolin) has embarked on his mission to acquire the six infinity stones, which would give him the power to eradicate half of all life in the universe. The action is divided on three fronts, as The Avengers try to prevent Thanos and his minions from collecting all the stones.

It has now been a decade since the start of the Marvel Cinematic Universe and Avengers: Infinity War marks the point where all the stories built up so far comes to a climax. The film finds themselves divided for most of the film, with the action switching between multiple locations. The main set piece is set in Wakanda, which has Captain America (Chris Evans) leading the reunited Avengers in a battle with Thanos’ minions, in effort to protect the Mind Stone held by Vision (Paul Bettany). Meanwhile, Iron Man (Robert Downey Jr.) and Spider-Man (Tom Holland) stow away on one of Thanos’ ships to try and save Doctor Strange (Benedict Cumberbatch) and his Time Stone. Finally, Thor (Chris Hemsworth) encounters the Guardians of the Galaxy, who have a personal reason to defeat Thanos.

Avengers: Infinity War has always been meant as an end point of sorts for the Marvel Cinematic Universe, as the bulk of the heroes introduced in the last decade find themselves facing their biggest challenge. It has been six years since Thanos was first introduced in the post-credits stinger from the first Avengers, but now he arrives in full force. Somewhat surprising is the fact that Thanos turns out to be a multi-layered villain, who has very complex reasons for all the death and destruction than he has caused. You almost are able to empathize with him in a way, which is probably due in no small part to the performance of Josh Brolin under all the CGI.

I do have to say that right from its opening moments, Avengers: Infinity War is probably one the most bleak superhero films that I have seen. There are some major casualties throughout the film, which ensures that the Marvel Cinematic Universe will never be the same after it is all said and done. Avengers: Infinity War is actually the first part of a two-film story arch, which will conclude with the fourth Avengers next year. As such, the film does end with things somewhat unresolved.

Overall, Avengers: Infinity War is an enjoyable, yet incredibly bleak, culmination of the last decades worth of build-up.