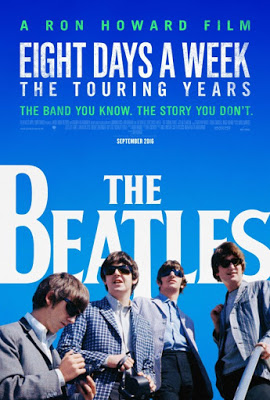 Ron Howard directs this look back at the peak of Beatlemania in The Beatles: Eight Days a Week – The Touring Years. Following the release of their debut album “Please Please Me” in 1963, The Beatles became an overnight success around the world. Over the course of the next three years, the band would release an additional six albums and tour non-stop, peaking with their 1965 concert for 55,000 screaming fans at Shea Stadium in New York City. However, the band would soon tire of life on the road, preferring to get much more experimental in the recording studio.

The Beatles: Eight Days a Week – The Touring Years utilizes archive footage and photographs to revisit The Beatles’ career from their early performances at the Cavern Club to their final show in San Francisco in 1966. The film also features new interviews with surviving members Paul McCartney and Ringo Starr, along with interviews with the likes of Whoopi Goldberg, Elvis Costello, Eddie Izzard, and Sigourney Weaver.

The question that needs to be asked in regards to The Beatles: Eight Days a Week – The Touring Years is whether it tells anything new about The Beatles? This is far from the first documentary on the band, with probably the most definitive look back being The Beatles Anthology from two decades ago. In fact, it was just three years ago when Good Ol’ Freda came out, considering itself to be the “last true story of The Beatles.”

Indeed, there is nothing covered in Eight Days a Week that hardcore fans of the band wouldn’t already be familiar with. If anything, the film is notable for including some rare archive footage to give a behind-the-scenes look at the peak of Beatlemania. The film covers all the bases, such as the band’s relationship with manager Brian Epstein and producer George Martin, as well as controversies such as the “Yesterday and Today” album cover and John Lennon’s comments about the band being “bigger than Jesus.”

It is interesting that Ron Howard opted to make a documentary that focused only on the touring phase of The Beatles career, which makes me wonder whether there is another documentary coming that focusing on the band’s studio years. However, Eight Days a Week does cover a lot of ground and the theatrical presentation of the film even includes a remastered version of The Beatles at Shea Stadium, which is a nice little bonus.

In the end, The Beatles: Eight Days a Week – The Touring Years doesn’t really cover any new ground when it comes to The Beatles career. However, the film doe provide a nicely packaged behind-the-scenes look at the most busy period of the band’s history.