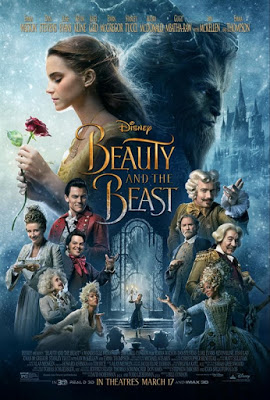 The Oscar-nominated animated film receives a live action remake with Beauty and the Beast. Belle (Emma Watson) is an independent young woman in the small French village of Villeneuve, where she lives with her inventor father Maurice (Kevin Kline) and fends off the advances of vain hunter Gaston (Luke Evans), who is always accompanied by his companion LeFou (Josh Gad).

When Maurice goes missing after a trip to the market, Belle follows his trail to find that he has been taken prisoner at an isolated castle occupied by a cursed Beast (Dan Stevens). Belle trades her life for her father’s and becomes The Beast’s prisoner in his stead. At the castle, Belle begins to become acquainted with the cursed servants, including candelabra Lumière (Ewan McGregor), clock Cogsworth (Ian McKellen), and teapot Mrs Potts (Emma Thompson). With their help, Belle begins to see The Beast as more than just a monster.

Over the past few years, Disney has been actively producing live action versions of their classic animated films, such as 2014’s Maleficent, 2015’s Cinderella, and 2016’s The Jungle Book. While there have been live actions of Disney animated films in the past, such as 1996’s 101 Dalmatians, this is the first time such adaptations have been done on a large scale.

Bill Condon (Dreamgirls) steps into the director’s chair for this live action version of 1991’s Beauty and the Beast, which was notable for being the first animated film to get an Oscar nomination for Best Picture. This new adaptation retains the original’s structure as a musical, featuring all the original musical numbers written by lyricist Howard Ashman and composer Alan Menken, along with four new songs written by Menken and Tim Rice. This new Beauty and the Beast is a pretty faithful adaptation of the original, with many scenes following the same beats.

As someone who grew up with the original Beauty and the Beast, I have to enjoy seeing the classic songs redone in a live action setting. I have no complains about any of the actors’ singing skills, other than the fact that Ewan McGregor has to put on a very stereotypical French accent throughout the film. My main nitpick with the film is the story was extended, including more backstory for both Belle and The Beast, which came off as quite unnecessary. Also, The Beast’s facial movements are quite obviously CGI, which is a shame, since I read that Dan Stevens was in practical make-up during filming and that the facial changes were made in post.

When push comes to shove, I will say that I prefer the original Beauty and the Beast to this new live action version. However, that still doesn’t mean that this new adaptation wasn’t still a joy to watch.