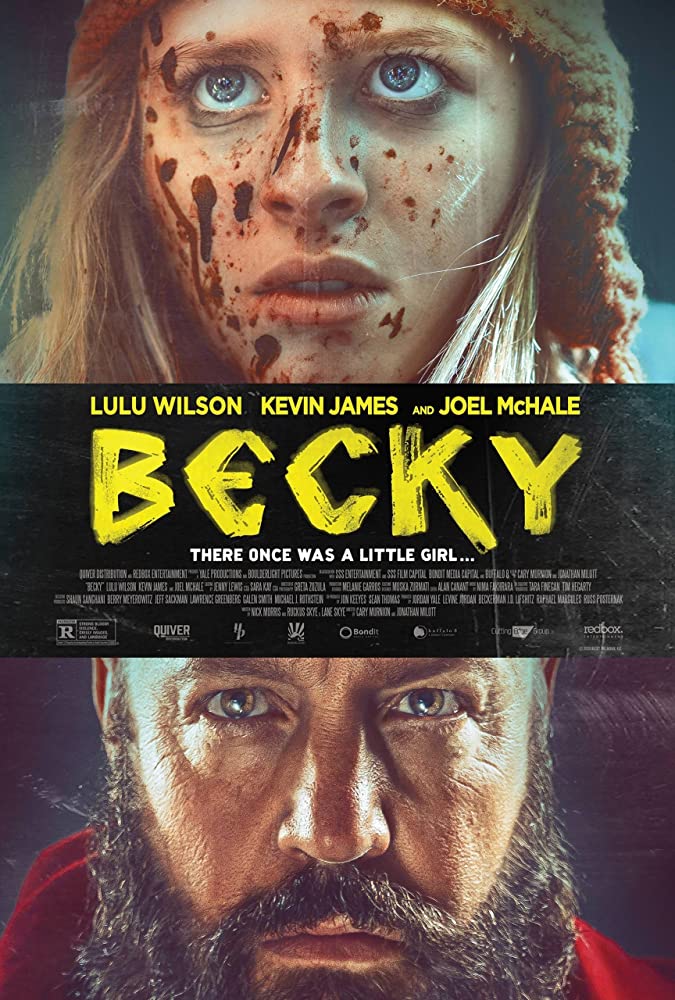 A teenage girl fights back against a gang of neo-nazis in Becky. Becky (Lulu Wilson) is a bullied high school student, who has a strained relationship with her father Jeff (Joel McHale) after the death of Becky’s mother. During a trip to the family cottage, Becky is not happy to find out that they have been joined by Jeff’s new fiance Kayla (Amanda Brugel) and her son Ty (Isaiah Rockcliffe). However, bigger problems arise when an escaped gang of neo-nazis, which includes leader Dominick (Kevin James) and his main associate Apex (Robert Maillet), take Jeff, Kayla, and Ty hostage, with Dominick looking for a key hidden on the property. It soon turns out the Becky, who his hiding in the surrounding woods, has found the key and she is not going to give it up easily.

Becky is a home invasion horror film from directors Jonathan Milott and Cary Murnion (Cooties), about a teenage girl seeking bloody revenge against a gang of neo-nazis. The film stars Lulu Wilson (The Haunting of Hill House) as the titular Becky, who is dealing with some major personal issues, due to the death of her mother from cancer a year prior. Becky is also notable for casting the usually comic Kevin James as the main antagonist Dominick.

Probably the easiest way for me to describe Becky is that the general plot is what you would get if you take the premise of Home Alone and cross it with Rambo. Indeed, it turns out the Becky is a budding sociopath and she proceeds to off the neo-nazis in increasingly bloody ways while hiding out in her shack in the woods. Becky is an incredibly dark and violent film and there are many cringe-inducing moments, particularly one involving a pair of safety scissors.

Probably the element of Becky that will end up being the biggest talking point is the casting of Kevin James, he of Paul Blart: Mall Cop fame, in his first villainous role, replacing an originally cast Simon Pegg, who dropped out of the film due to a scheduling conflict. The fact that Dominick sports a shaved head and bushy beard probably helps allow James to disappear into the role, which completely unlike anything he has played before. Becky also features a very solid supporting performance by wrestler-turned-actor Robert Maillet, in what is probably his meatiest role to date.

While Becky does have very solid casting, I do have to take the film down a few notches, due to the film’s overall dark tone, including repeated offences of the “violence against dogs” taboo, which I am quite sensitive about. The film is also a little light on any real substance to the story, with the key that the neo-nazis are after being little more than a macguffin. However, Becky should still satisfy fans of the “kids take bloody revenge against criminals” horror genre.

Becky is now available on iTunes and other VOD platforms