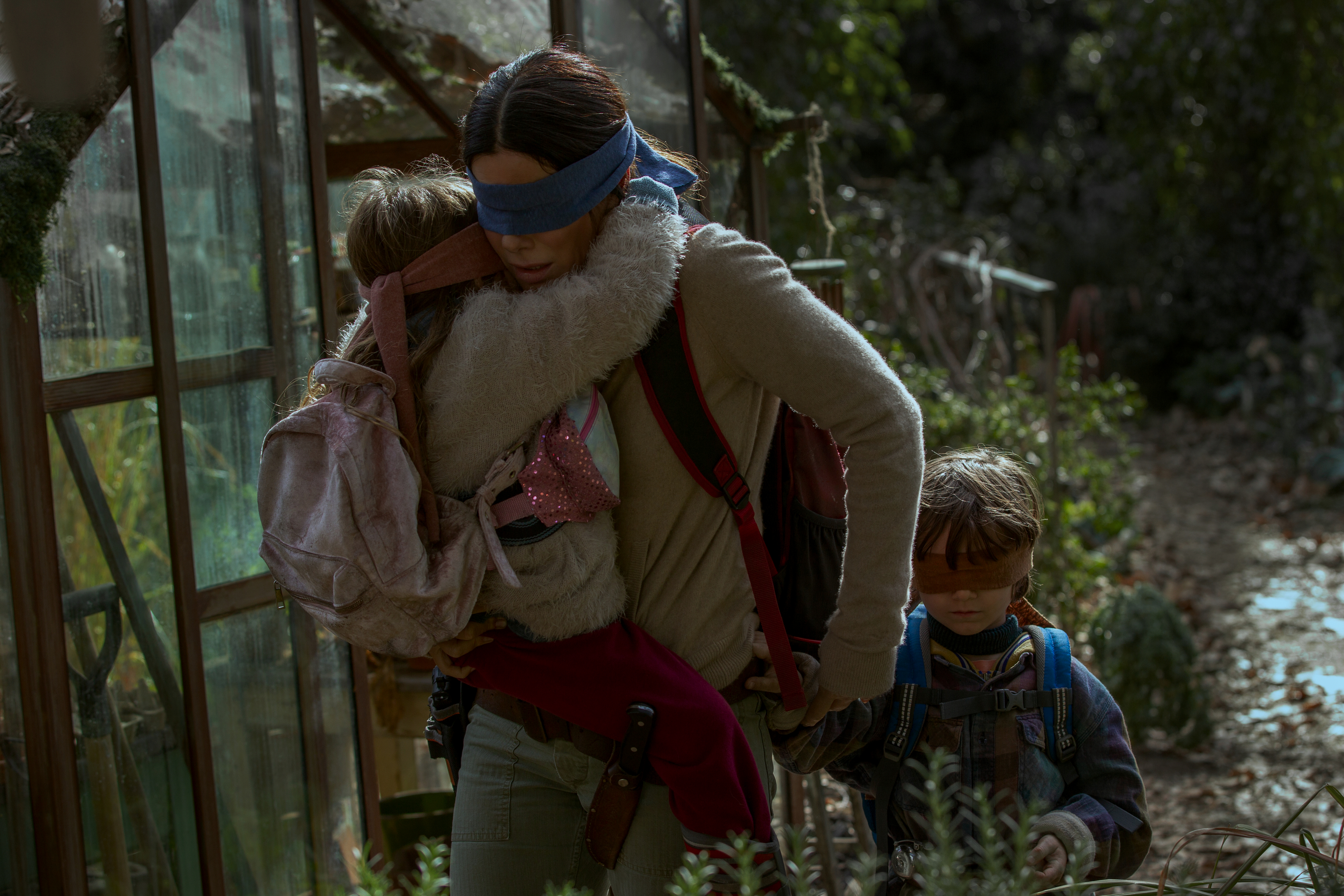 6.7
Bird Box (2018) 2h 4min | Drama, Horror, Sci-Fi | 21 December 2018 (USA)
Director: Susanne BierWriters: Eric Heisserer, Josh MalermanStars: Sandra Bullock, Trevante Rhodes, John Malkovich
Summary: Five years after an ominous unseen presence drives most of society to suicide, a mother and her two children make a desperate bid to reach safety.
Countries: USALanguages: English
Source: imdb.comDisclaimer: This plugin has been coded to automatically quote data from imdb.com. Not available for any other purpose. All showing data have a link to imdb.com. The user is responsible for any other use or change codes.

A woman and her two children try to survive in the aftermath of an extinction level event in Bird Box. Malorie (Sandra Bullock) sets off on a dangerous journey downriver, accompanied by her two child simply named “Boy” (Julian Edwards) and “Girl” (Vivien Lyra Blair). Five years previous to this, a pregnant Malorie was at the hospital with her sister Jessica (Sarah Paulson) when some sort of supernatural force begins compelling people to commit suicide. Malorie finds safety at a house along with fellow survivors Tom (Trevante Rhodes), Greg (BD Wong), Cheryl (Jacki Weaver), Lucy (Rosa Salazar), Charlie (Lil Rel Howery), Felix (Colson Baker), Olympia (Danielle Macdonald), and Douglas (John Malkovich). When supplies begin to run low, the survivors have to find a way to get outside without looking at the sinister presence.

Bird Box is a survival horror film directed by Susanne Bier (In a Better World), based on the 2014 novel by Josh Malerman. The plot of the film moves back and forth between the time during and after this apocalyptic event. Admittedly, this flashback structure does take away somewhat from the suspense of the film, since it is already established from this first scene that Malorie and her two child are the sole survivors of this group hiding away in a house, so most of the film is a waiting game until the other characters in the film end up deceased.

While the similarity is apparently just coincidental, the basic premise of Bird Box, in which a supernatural force compels people to commit suicide, is pretty much the exact same as the plot for M. Night Shyamalan’s 2008 film The Happening. Bird Box also has some similarities to 2009’s The Road and even last year’s A Quiet Place. That’s not to say that Bird Box is a completely unoriginal horror film, it’s just that a lot of what’s in the film has been seen in other films.

Probably the element that allows Bird Box to standout the most is the film’s very stacked cast that includes Sandra Bullock, Trevante Rhodes (Moonlight), Jacki Weaver, and John Malkovich, with the latter being a de facto antagonist of sorts as the trigger-happy alcoholic of the group. Then there’s Tom Hollander, who is introduced late in the film as fellow survivor Gary, who seems to be hiding a dark secret.

Altogether, I can say that Bird Box is a fine survivor horror film, even though it ultimately doesn’t leave much of a lasting impression.

Bird Box is now available for streaming on Netflix