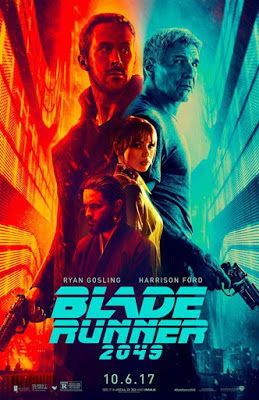 We return to the conflict between humans and replicants 30 years later in Blade Runner 2049. In the year 2049, replicants developed by Niander Wallace (Jared Leto) have been integrated into society. Officer K (Ryan Gosling) is a replicant blade runner, who is tasked with finding and retiring older model replicants. While on a job, K finds a box with the skeletal remains of a replicant, who seemingly died during childbirth. Knowing that the existence of a procreating replicant can start a war, K is tasked by his superior Lt. Joshi (Robin Wright) to find and retire the replicant child. The search leads K to former blade runner Rick Deckard (Harrison Ford), who has been living in hiding for the past three decades.

35 years after the original film’s release, Denis Villeneuve (Arrival) directs the follow-up Blade Runner 2049. In the decades since the original, the Tyrell Corporation has gone under, with the Wallace Corporation corporation rising in its place. Officer K is a newer model replicant designed to obey his human superiors, who spends his home life with his holographic girlfriend Joi (Ana de Armas). K becomes conflicted when he is tasked to retire a replicant who was born, instead of made. At the same time, Wallace and his replicant enforcer Luv (Sylvia Hoeks) also want to find the child, in order to try and replicate the ability for replicants to procreate.

In 1982, Ridley Scott loosely adapted Philip K. Dick’s 1968 novel Do Androids Dream of Electric Sheep? as the film Blade Runner, which asks the question of what makes a human. The film was neo noir science fiction tale of man vs machine, as veteran blade runner Rick Deckard tracked down a group of rogue bioengineered replicants lead by Roy Batty. Blade Runner wasn’t really a box office hit, though it gained a cult following in the years since. One of the questions that Ridley Scott toyed with was whether or not Rick Deckard was himself a replicant, which is heavily hinted at in the multiple different cuts of the film. Thankfully, Blade Runner 2049 doesn’t really try to answer that question and it also wastes no time in revealing that the new blade runner Officer K is himself a newer model replicant integrated into society.

It seems that Denis Villeneuve’s goal with Blade Runner 2049 was to make a film that was on its surface a sequel to the original, but also told its own story. Probably the biggest connective tissue to the original Blade Runner is the return of Harrison Ford as Rick Deckard, though the film also features a brief cameo by Edward James Olmos as retired blade runner Gaff and heavy references to Sean Young’s character of Rachael.

Even though I tend to be a fan of Denis Villeneuve’s films, I do have to admit that Blade Runner 2049 is the very definition of an overlong and unnecessarily sequel that doesn’t really add anything new to the original. One of the more interesting aspects of the original Blade Runner is that the villain Roy Batty is often a more sympathetic figure than Rick Deckard, who is portrayed as an alcoholic shell, who was actually quite abusive towards Rachael, including a “love” scene that heavily borders on rape. Blade Runner 2049 seems to blatantly ignore those aspects of Deckard’s character, having him merely be a piece of the puzzle K is trying to solve. In fact, despite Harrison Ford receiving second billing in the film, he doesn’t really appear until about two thirds into the story.

Another issue I had with Blade Runner 2049 is its 2h44m running time, which is nearly an hour longer than the original film. There is no need for this story to be that long and there is a lot of stuff from the middle that could have been cut out to make this a tighter film. However, this is more an issue about the state of blockbusters in general than this film specifically, though I do have to say that I really felt Blade Runner 2049‘s run time. I also somewhat disappointed by the cinematography by Roger Deakins, which tries to emulate the original, but never really felt right for me. The original Blade Runner is now 35 years old, however the visuals of that film still really hold up. This film seems a lot more dark and murky to me, save a third act that is set in the desert.

Admittedly, Blade Runner has been a film that appealed more to men than women and I don’t think the characterization of females in this film really help that matter. Cuban actress Ana de Armas is probably the closest thing the film has to a female lead, though she is almost entirely in the film to just be a love interest for K. While there are a few strong female characters in the film, such as Robin Wright’s Lt. Joshi, this is still very much a male-centric story. That said the film does have Dutch actress Sylvia Hoeks as one of the central villains, even though her performance pales in comparison to Rutger Hauer from the original.

Altogether, I would say that while I believe that Blade Runner 2049 is a fine enough film on its own, it was not really worth the 35 year wait.