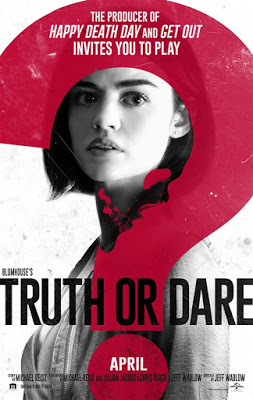 A game of truth or dare turns deadly in Blumhouse’s Truth or Dare. Humanitarian college student Olivia (Lucy Hale) is convinced to go on a spring break trip to Mexico with best friend Markie (Violett Beane) and her boyfriend Lucas (Tyler Posey), along with fellow friends Penelope (Sophia Ali), Tyson (Nolan Gerard Funk), Brad (Hayden Szeto), and Ronnie (Sam Lerner). At a Mexican bar, Olivia befriends charming stranger Carter (Landon Liboiron), who leads the group to an old dilapidated Mission for a game of truth or dare. However, it turns out that Carter has tricked Olivia and her friends to be afflicted by a demonic curse that requires them to keep playing the game, or else they will die.

From prolific horror production house Blumhouse (Split, Get Out) and director Jeff Wadlow (Cry_Wolf, Kick Ass 2) comes Truth or Dare. The film follows a group of college students, who find themselves cursed by a deadly game of truth or dare. The demonic force that has attached itself to the game requires the friends to keep playing, with everyone who lies or refuses to perform a dare ending up dead. Olivia and her friends rush to find the source of this curse and find a way to cure themselves.

For nearly a decade now, I have had a very love-hate relationship with producer Jason Blum and Blumhouse Productions, which has pretty much dominated the mainstream horror market since Blum picked up Paranormal Activity for distribution back in 2009. I will not deny that Blumhouse has generated many hits over the years and last year’s Get Out even garnered a Best Picture nomination. However, with Blumhouse’s films being relatively low budget, there seems to be a focus more on quantity than quality, with there being just as many duds than hits for Blumhouse.

Truth or Dare is perfect example of the type of paint-by-numbers horror film that is green lit and set for release, where it will likely generate a small profit from the horror faithful, before fading to obscurity. Featuring a hot young cast that includes Lucy Hale (Pretty Little Liars) and Tyler Posey (Teen Wolf), Truth or Dare has a plots that seems like it would be right at home in the J-horror craze of the early 2000s, except instead of a cursed videotape, we are dealing with a cursed game of truth or dare.

In of itself, Truth or Dare has an inherently ridiculous premise, which is made even more so by the fact the demonic force controlling the game takes over people and gives them an over-the-top grin that is described in the film as a “messed up snapchat filter.” It is for this feature alone that Truth or Dare is more funny than scary, which is not good for a film that is trying to play things completely straight.

I’m not going to waste much more time talking about this for. Overall, Truth or Dare is a personification of everything I dislike about paint-by-numbers mainstream horror films, especially those that happen to be funded by Blumhouse Productions.