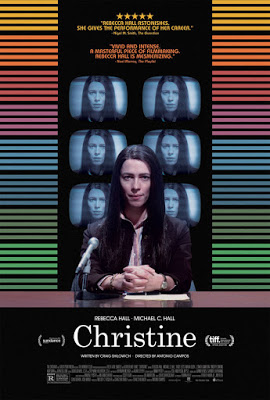 A newswoman’s depression leads to on-air tragedy in Christine. Christine Chubbuck (Rebecca Hall) is a news reporter in 1970s Sarasota. Despite her desire to report on important issues, she is assigned public interest fluff pieces by her boss Michael (Tracy Letts), who has gained an interest in more sensationalist news, in order to grab ratings. Christine’s only real personal connections at the station are with lead anchor George Peter Ryan (Michael C. Hall), who she secretly has a crush on, and camerawoman Jean Reed (Maria Dizzia). When a chance for a promotion comes up, the pressure to succeed drives Christine’s anxieties to the limits.

Christine tells the true story of news reporter Christine Chubbuck, who infamously committed suicide on air in 1974. The apparent goal of the film is to break down the sequence of events that lead to Christine making this tragic choice. Christine Chubbuck was an ambitious news reporter, who was held back by her sexist boss, who was only interested in sensationalist news stories for ratings. In addition, Christine has a conflicted relationship at home with her freeloading mother Peg (J. Smith-Cameron). On top of all this, Christine has a history with depression, which resurfaces when she tries to secure a new job in Baltimore.

As is the case of many films based on true events, knowing how the story of Christine turns out somewhat dilutes the shock of the titular character’s on-air suicide, which merely comes off in the film as a punctuation of a sequence of events. However, the film does say a lot about how depression was viewed in the 1970s, with Christine’s mother just shrugging off the behaviour as one of Christine’s moods. It would probably never be known what was the breaking point that resulted in Christine Chubbuck taking her life on air, though the film does offer a number of hypotheses.

Rebecca Hall does give a quite great performance as the titular character, portraying Christine as incredibly ambitious, yet tortured by anxiety. The only other cast members that standout in the film are Michael C. Hall has George Peter Ryan, Maria Dizzia as Jean Reed, and Tracy Letts as Michael. Visually, the film does give off a 1970s aesthetic, with a muted colour scheme and period sets.

Despite the standout lead performance by Rebecca Hall, Christine is standard biopic fare, which suffers from the “real life spoilers” that dilutes any real impact that the events of the film may have had.