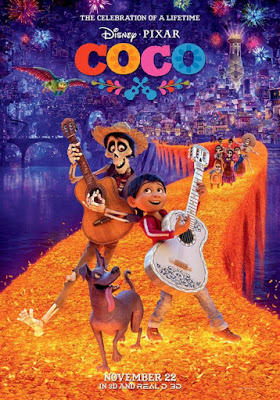 A Mexican boy finds himself lost in the land of the dead in Disney and Pixar’s Coco. In the Mexican village of Santa Cecilia, 12 year old Miguel Rivera (Anthony Gonzalez) dreams of being a musician like his idol Ernesto de la Cruz (Benjamin Bratt), however music is banned by Miguel’s family of shoemakers. Wanting to perform in the village plaza as part of the Day of the Dead celebrations, Miguel breaks into the crypt of Ernesto de la Cruz, who he believes to be his great-great-grandfather, and takes his guitar. However, this ends up cursing Miguel and he finds himself in the Land of the Dead. With the help of a trickster named Héctor (Gael García Bernal), Miguel has until morning to find Ernesto de la Cruz and get his blessing to pursue music in the living world.

Taking a break from the sequels that currently dominate its production schedule, Disney and Pixar break you Coco, a film centred around the Mexican celebration of Día de Muertos, known in English as the Day of the Dead. Many generations ago, a musician left Miguel Rivera’s great-great-grandmother Imelda Rivera (Alanna Ubach) and her daughter Coco (Ana Ofelia Murguía), who is still alive as Miguel’s often forgetful great-grandmother. As the result of the abandonment, Miguel’s family, particularly his grandmother Abuelita (Renée Victor) have banned music, instead focusing on a successful shoemaking business. However, Miguel secretly idolizes Mexico’s greatest singer Ernesto de la Cruz and dreams of being a musician just like him.

In a similar fashion to last year’s Moana, which focused on the Polynesian people, Coco continues the diversification of Disney animated films with a story set in Mexico during the Day of the Dead celebrations. This includes a voice cast of Latino and Hispanic actors including Gael García Bernal, Benjamin Bratt, and newcomer Anthony Gonzalez in the lead role of Miguel Rivera. In addition, while Coco isn’t a musical in the same fashion as other Disney films, the film does feature many Flamenco musical numbers, including the main song “Remember Me.”

Having once being one of the top animation houses, Pixar’s stock in recent years have dropped with an increased focus on sequels to their previous hits like Cars, Finding Nemo, and The Incredibles. Coco is the first original Pixar film since Inside Out and The Good Dinosaur in 2015. It is definitely refreshing seeing them come out with a film that isn’t a rehash of something they have done before. I’m also personally very interested in the Mexican Day of the Dead, so a film centered on that is quite intriguing to me, even if other films have done it better.

Altogether, Coco is an entertaining and heartwarming Flamenco-tinged adventure in the land of the dead.