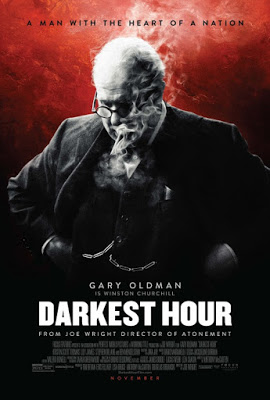 Winston Churchill is forced to make tough decisions during the early days World War II in Darkest Hour. In May 1940, the Nazis have occupied most of Western Europe and British Prime Minister Neville Chamberlain (Ronald Pickupis) forced to resign and the Liberal and Conservative parties form a grand coalition to tackle the Nazi threat. Despite the obvious successor to Chamberlain being Viscount Halifax (Stephen Dillane), the Conservatives insist on choosing Winston Churchill (Gary Oldman) as the new Prime Minister. Immediately after taking office, Churchill is adamant about fighting to the end, instead of entering into peace talks. However, this becomes difficult when the British army finds themselves stranded at Dunkirk.

Director Joe Wright (Atonement) directs a near-unrecognizable Gary Oldman as Winston Churchill in Darkest Hour. Churchhill has come to be known as one of the most well known British Prime Ministers, despite the fact that he got the job quite late in life. A defining trait of Churchhill is that he is a man that is not easy to get along with, as seen at the start of the film when he chastises his new typist Elizabeth Layton (Lily James). Making an enemy out of Viscount Halifax for his refusal to enter into peace talks, Churchill is left in an unpopular situation as he is left to make some serious decisions about what to do about the men left stranded at Dunkirk.

In many ways, Darkest Hour can be seen as a de facto companion piece to Christopher Nolan’s Dunkirk, since this film centers around the politics surrounding that evacuation. At the centre of the film is Gary Oldman, under much prosthetic make-up, as Winston Churchill. Churchill was probably best known for being quite the curmudgeon and the biggest moments of the film involves him losing his temper. However, there are also many character based moments in the film, particularly involving Churchill’s interactions with his wife Clementine (Kristin Scott Thomas) and King George VI (Ben Mendelsohn). There is also a quite well done scene in the film that sees Churchill entering the London Underground and conversing with the general public.

As a political drama, Darkest Hour can be a quite complicated film to watch in today’s climate. The film makes it abundantly clear that Winston Churchill was all about victory in the war at all costs. In the context of the second World War, this was probably the right decision, since it was unlikely that peace talks with the Nazis would have ended favorably for the British. However, in today’s political climate, it is kind of scary to see the parallels between Winston Churchill, who was technically a right wing politician, and the current US presidency of Donald Trump. That said, I do think Churchill had his priorities more in order.

Ultimately, Darkest Hour is film to watch primarily for Gary Oldman’s performance as Winston Churchill, though the film is overall a quite decent political wartime drama.