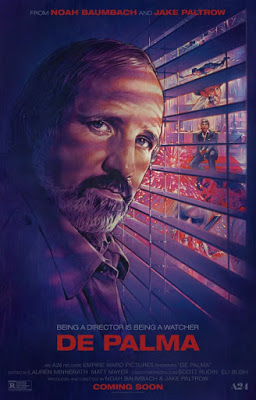 Brian De Palma talks about his career in De Palma. Brian De Palma first got interested in filmmaking while he was studying Physics at Columbia University during the 1960s. De Palma was heavily influenced by the films of Alfred Hitchcock, particularly Vertigo, and even hired Bernard Herrmann to score his early films, including as 1973’s Sisters. While utilizing a wide variety of filmmaking tricks, such as split screen, De Palma also received criticism for the violent content in many of his films.

Directed by Noah Baumbach and Jake Paltrow, De Palma is little more than a long form interview with Brian De Palma, accompanied by clips from his films. De Palma talks about his entire filmmaking career from his 1962 short film Woton’s Wake to his 2012 feature Passion. De Palma considers himself one of the only filmmakers to follow in Alfred Hitchcock’s footsteps and he addresses the criticism of his films, stating that he was criticized against the fashion of the day, with many of his films now considered to be classics.

From a film history standpoint, De Palma is a quite in-depth biography of the filmmaker, as told by the man himself. It is interesting learn some of the early history of De Palma, who was actually studying physics and Columbia University when he decided to move into filmmaking. Watching Brian De Palma talk about his filmography, he is obviously a director who is passionate about his craft. Even with the films that he considers to be a disaster, such as 1981’s Blow Out, De Palma always finds something interesting to talk about for every film in his filmography.There is enough in De Palma to satisfy both fans of Brian De Palma and those who want an introduction to the filmmaker.

If there is something critical to be said about De Palma, it is that the film has a very monotonous presentation, consisting entirely of single talking head interview with De Palma sitting in front of a fireplace. As such, I’m not sure that Noah Baumbach and Jake Paltrow had much directing to do in this film, other than asking De Palma questions off camera, In fact, other than Brian De Palma directly referencing them on a couple of occasions, Baumbach and Paltrow’s presence is not really noticeable. De Palma would have seemed more complete if it also had other people talking about Brian De Palma’s career. However, as it stands, the film is still a satisfactory look back at the filmmaker’s career.

De Palma opens today at the TIFF Bell Lightbox. Accompanying the release of the film will be the retrospective Split/Screen: The Cinema of Brian De Palma, which will run from June 18 until September 3.