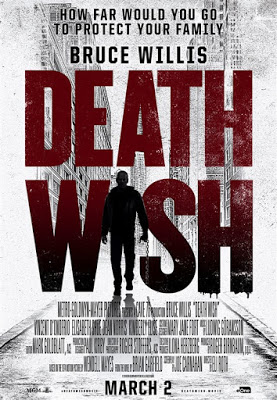 Bruce Willis stars in a remake of the 1974 cult classic in Death Wish. Dr. Paul Kersey (Willis) is a trauma surgeon in Chicago, who has a seemingly happy life with his wife Lucy (Elisabeth Shue) and daughter Jordon (Camila Morrone), despite the fact that Paul’s younger brother Frank (Vincent D’Onofrio) is always asking for money. However, Paul’s life is turned upside when Lucy and Jordon are attacked during a burglary, leaving Lucy dead and Jordon in a coma. Frustrated at the slow progress of Detective Kevin Raines (Dean Norris) to catch the people responsible, Paul decides to take matters into his own hands.

1974’s Death Wish and its four sequels have developed a cult following over the years and made a star out of actor Charles Bronson. Screenwriter Joe Carnahan (Narc, Smoking Aces) returns to the original 1972 novel by Brian Garfield to pen this remake, which is directed by Eli Roth (Cabin Fever, Hostel). This remake bring on Bruce Willis as doctor, turned vigilante Paul Kersey, who decides to enact bloody revenge on those who wronged his family. Dubbed “The Grim Reaper” by the media, Paul’s acts of vigilantism results in him becoming a cult figure in Chicago.

While Death Wish is a departure from the horror films that he is primarily known for, Eli Roth isn’t afraid to make to this an extremely bloody affair, with Paul Kersey utilizing increasingly graphic ways to dispatch of criminals. In many ways, Death Wish can be described as an exploitation film that is being produced for the consumption of mainstream audiences. This is an extremely violent film, but that’s sort of OK, since that’s expected for the vigilante genre.

If there is on major criticism I have about Death Wish is that the film does kind of go overboard with the fetishization of firearms. While likely meant in a satirical sense, the use of guns in Death Wish does kind of fall in line with the beliefs of the National Rifle Association and in light of various gun-related tragedies in the United States, this did end up making me feel a bit icky.

I probably had the advantage of not having to compare this version of Death Wish to the original, so I can view it by its own merits. Overall, the film ended up being a better than expected vigilante thriller, despite coming off at times like a PSA for the NRA.