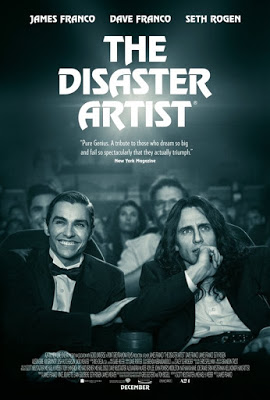 The story behind the making of the infamous “so bad, it’s good” cult classic The Room is told in The Disaster Artist. Greg Sestero (Dave Franco) is an aspiring actor living in San Francisco. During an acting class in 1998, Greg meets the enigmatic Tommy Wiseau (James Franco) and is struck by his fearless stage presence. They two quickly strike up a friendship and move to Los Angeles to pursue their acting dreams. After being told by a producer that he’ll not get a role in a million years, Tommy decides to write, produce, direct, and star in his own film. Casting Greg as the co-lead and bringing on a crew of professionals, including script supervisor Sandy Schklair (Seth Rogan) and Director of Photography Raphael Smadja (Paul Scheer), Tommy makes a film that will come to be known as the “Citizen Kane of bad movies.”

James Franco directs and stars in The Disaster Artist, which is based on the autobiography of the same name by Greg Sestero about his experiences making The Room with Tommy Wiseau. Tommy is a larger-than-life figure with his age, place of birth, and source of income being unknown to all around him. The Room was self-financed for around $6 million dollars and was made despite the fact that it was blatantly obvious that Tommy knew nothing about making movies. During the shoot Greg gets increasingly frustrated with Tommy’s antics, especially after the latter gets jealous of Greg’s relationship with Amber (Alison Brie).

While James Franco has more than a decades worth of directorial credits, ranging from independent features to experimental documentaries, The Disaster Artist is arguably his first major film as a filmmaker. Franco obviously picked a quite intriguing subject to tackle, since for better or worse The Room has become the Rocky Horror Picture Show of this generation, with the film enjoying success on the midnight movie circuit. Personally, The Room was a decade older before I even heard of the film and my one and only time attending a midnight screening of the film resulted in me being repeatedly pelted with plastic spoons from a incredibly rowdy crowd.

Without a doubt, The Disaster Artist is a quite entertaining film about the making of a terrible movie. James Franco knocks it out of the park with his spot-on performance as Tommy Wiseau, complete with odd mannerisms and weird accent. Franco also recreates scenes from The Room with great attention to detail and the film even takes the time to side-by-side comparison of the recreated scenes with the original film. The Disaster Artist also features appearances by many familiar faces playing the actors from The Room, including Zac Efron, Jacki Weaver, and Josh Hutcherson.

If there is a criticism I have about The Disaster Artist, it is that the film makes it seem like The Room was destined to be a cult classic from its very first screening. In addition, the start of the film features appearances from the likes of Kevin Smith, Adam Scott, and J.J. Abrams giving their praises of The Room. While this might be done in an ironic sense, I also believe that this mythologizing of The Room only really serves to stroke the ego of Tommy Wiseau, who really hasn’t done anything of note since.

However, despite those criticisms, I still recommend checking out The Disaster Artist.