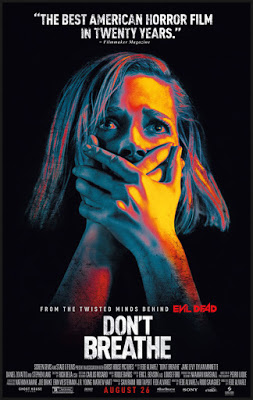 An attempted robbery goes horribly awry in Don’t Breathe. Rocky (Jane Levy), Alex (Dylan Minnette), and Money (Daniel Zovatto) are three delinquent teens in Detroit, who use keys from Alex’s father’s security company to rob the houses of rich people. Rocky is desperate to leave the trailer trash lifestyle she lives with her younger sister and a possible opportunity comes up when Money chooses to rob a blind war veteran (Stephen Lang), who apparently received a large cash settlement after the death of his daughter in a car accident. However, as the three break into the house, they quickly find that it isn’t a harmless blind man they are robbing.

After directing the 2013 remake of Evil Dead, Fede Alvarez reteams with producer Sam Raimi and star Jane Levy for a tense thriller about a group of robbers, who receive more than they bargained for when they decide to rob a rich blind man. Playing off the trope that a blind person’s other senses are heightened, Stephen Lang’s unnamed Blind Man turns out to be a deadly foe for these invaders to his house.

The bulk of Don’t Breathe is cat and mouse game, with Rocky and the others trying to escape the house without attracting the attention of The Blind Man. This results in many tense set pieces, including one taking place in a pitch dark basement, shown through black and white night vision, which evokes a similar scene that is present in The Silence of the Lambs. Stephen Lang is a man of few words in his antagonistic role, with The Blind Man not being all that different than the silent killers that dominate the slasher film genre.

While Don’t Breathe is generally a tense and well-executed film, there is a scene in the film that crosses the line into downright disturbing. There is no real logical reason for this scene to be included and feminists concerned about the treatment of women in horror films are sure to have a field day writing think pieces about this scene, which really only takes up five minutes or so of screen time. It’s almost a shame that Fede Alvarez decided to go in this direction, since it is only really in the film for the shock value and could have been removed without affecting the story whatsoever.

Despite the hiccup of that controversial scene, I do have to say that Don’t Breathe is one of the rare mainstream horror films that delivers, with a focus more on building up tension than having constant jump scares. I definitely recommend checking it out.