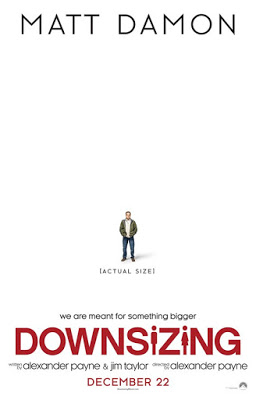 A man gets shrunk down in the hope for a better life in Downsizing. Norwegian scientist Dr. Jorgen Asbjørnsen (Rolf Lassgård) has discovered a method to shrink the human body down to a height of only five inches, in an effort to combat overpopulation. Paul Safranek (Matt Damon) is a cash-strapped man living in Omaha, who decides to sign up to be downsized with his wife Audrey (Kristen Wiig). However, it turns out that being small is not the perfect life that Paul believed to be, with him working a menial job and putting up with the constant parties by his Serbian neighbor Dusan Mirkovic (Christoph Waltz). Paul strikes up a friendship with Dusan’s Vietnamese housekeeper Ngoc Lan Tran (Hong Chau), which leads him on his way to find purpose for his small life.

The latest from director Alexander Payne (Sideways) looks at a world in the near-future where scientists have discovered the ability to shrink the human body, which theoretically would be the solution for the world’s problems with overpopulation. The miniature lifestyle is portrayed as a practical utopia, since you would require much less money to live. After getting a taste of how great downsizing is from his friend Dave (Jason Sudeikis) and a presentation for the Leisureland community in New Mexico (featuring cameos by Neil Patrick Harris and Laura Dern), Paul decides that downsizing is the life of him. However, it doesn’t take long for Paul to find out that downsized life isn’t all that it’s cut out to be and it is possible that the environmental impact of becoming small has come too little, too late.

Downsizing is both a somewhat more ambitious film for Alexander Payne, while also featuring many of the character elements his films have been known to include. Beneath the film’s sci-fi concept of shrinking human beings down to five inches tall, Downsizing is ultimately about the impact humanity has had on the world. While the film is structured as a dark comedy, there are some very dire messages in the film about both climate change and overpopulation. In addition, while downsizing is offered as a possible solution for the world’s population problem, only a very small percentage of people undergo the procedure and are met somewhat with prejudice from everyone else.

While there are some aspects of Downsizing that I liked, I do have to contend that the film is ultimately a bit of a misstep for Alexander Payne. He is trying to say too much with the film, which is shown by its 2h 15m running time. Downsizing is much too long for the type of film it is and it could have definitely used a fair bit of trimming. I would actually the biggest standout of Downsizing would be Taiwanese actress Hong Chau (Inherent Vice) as the very fast-talking, one-legged Vietnamese refugee Ngoc Lan Tran, who is very much an Alexander Payne character. I should also add that Christoph Waltz is as charming as ever, though his attempts to put on a Serbian accent for Dusan is laughable at best.

Overall, Downsizing is a film with an environmental message that ends up being way too long for what it is, though still very much an Alexander Payne film.