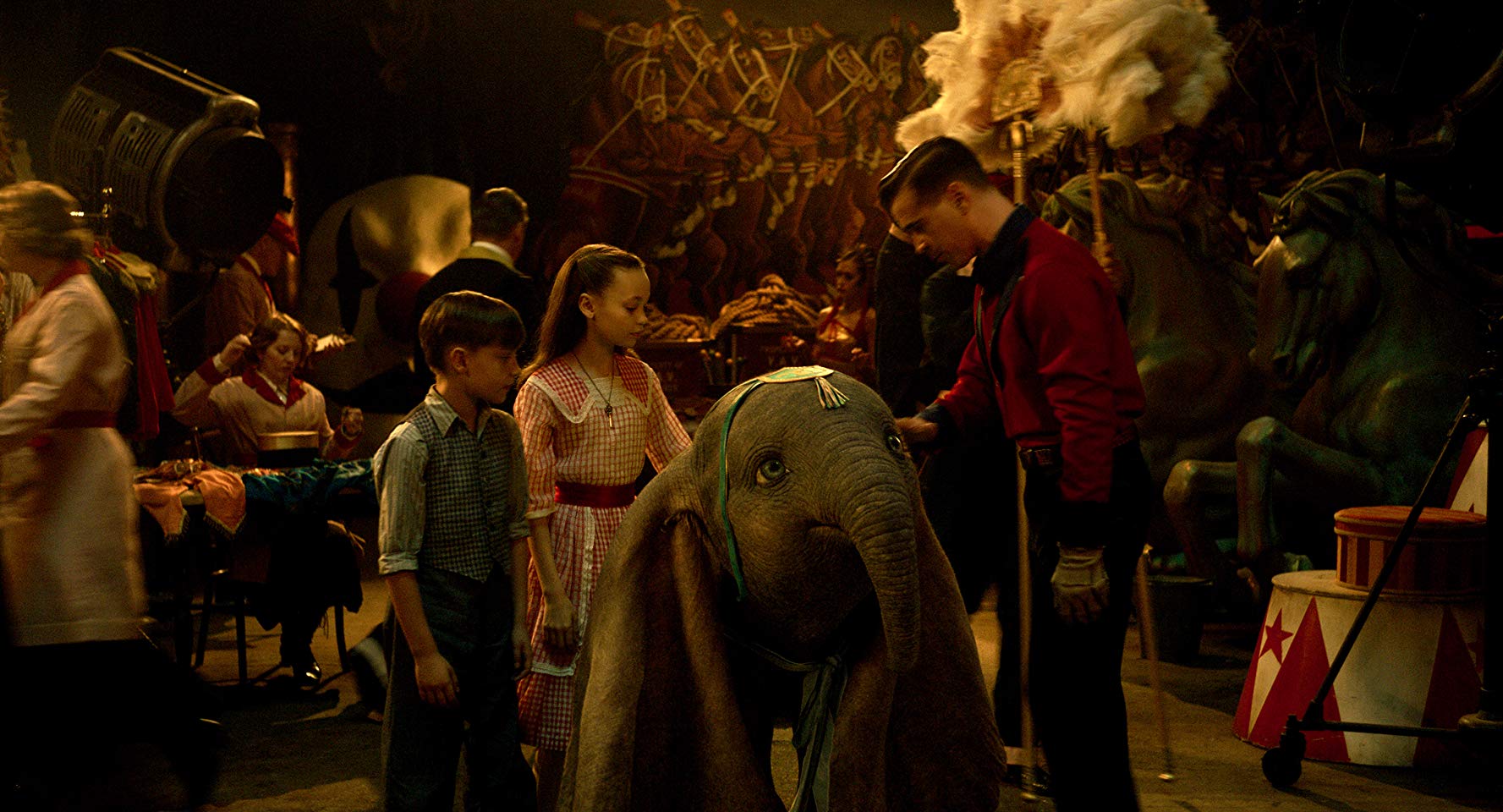 6.8
Dumbo (2019) 1h 52min | Family, Fantasy | 29 March 2019 (USA)
Director: Tim BurtonWriters: Helen Aberson, Ehren KrugerStars: Colin Farrell, Michael Keaton, Danny DeVito
Summary: A young elephant, whose oversized ears enable him to fly, helps save a struggling circus, but when the circus plans a new venture, Dumbo and his friends discover dark secrets beneath its shiny veneer.
Countries: USALanguages: English, French
Source: imdb.comDisclaimer: This plugin has been coded to automatically quote data from imdb.com. Not available for any other purpose. All showing data have a link to imdb.com. The user is responsible for any other use or change codes.

Tim Burton directs a live-action re-imagining of the animated classic with Dumbo. Holt Farrier (Colin Farrell) is an equestrian performer and widower, who has just returned from the First World War and is reunited with his kids Molly (Nico Parker) and Joe (Finley Hobbins) at the Medici Brothers Circus. However, the circus run by Max Medici (Danny DeVito) has hit hard times and Holt is assigned to care for the elephants, particularly his prized pregnant elephant Jumbo. However, Jumbo’s child is born with giant ears and is named Dumbo by the mocking audience. Additionally, Jumbo is sent away after she goes on a protective rampage. However, Molly and Joe discover that Dumbo can use his big ears to fly, with the help of feathers, which results in the young elephant becoming a huge hit for Medici. This attracts the attention of amusement park owner V. A. Vandevere (Michael Keaton), who wants to make Dumbo his star act along with trapeze artist Colette Marchant (Eva Green).

The trend of Disney remaking their classic animated films continues with this live action version of Dumbo. Reunited with Disney for the first time since 2012’s Frankenweenie, Tim Burton is given the task of expanding the 64 minute 1941 animated original into a nearly two hour long live action feature. The biggest difference between the original Dumbo and this new film is a greater focus on human characters, even there are still some references to the talking animals present in the original.

There is little doubt that Tim Burton was the perfect director to make a live action version of Dumbo, since the circus setting fits in perfectly with the director’s aesthetic. That said, I do admit that Dumbo takes a while to get going, with a first act that is somewhat overtly dramatic and slow paced. It isn’t really until Michael Keaton enters the picture as V. A. Vandevere that the film really starts to pick-up, especially after we are brought to Vandevere’s over-the-top amusement park Dreamland. Dumbo marks Michael Keaton’s first collaboration with Tim Burton since Batman Returns back in 1992 and he ends up stealing the film as scenery chewing villain. Also reuniting with Tim Burton in this film is Danny DeVito in his fourth collaboration and new leading lady of choice Eva Green in her third collaboration. The film also features a brief appearance by Alan Arkin, making his first appearance in a Tim Burton film since Edward Scissorhands.

It is probably safe to say that that Tim Burton’s output over the last decade has been hit or miss at best and slow start of Dumbo made me fearful that this would be a miss. However, once the action of the film switches over to the Dreamland amusement park, I would say that the film finally hits its stride and I’ll even say that Dumbo ends up being one of Tim Burton’s better latter day films.